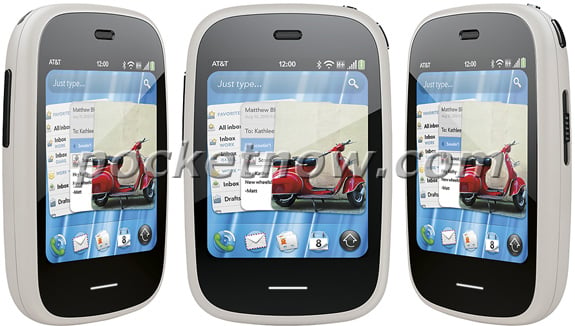 We’ve seen trucks driving around promoting HP’s next webOS smartphone, we’ve seen the diminutive Veer pass through the FCC, and now some crisp press shots have surfaced, clearly marked for a spot on AT&T’s shelves. As you can see, the Veer is sporting a white paint job that has yet to be seen until now; personally, I prefer the classic black, but apparently white phones are a pretty big deal.

The HP Veer will be the smallest in a trio of new webOS devices launched over the next couple of months, all of which were announced at Mobile World Congress. Despite its size, it includes some respectable specifications, like an 800 MHz processor, 2.6-inch 320 x 400 display, 512 MB of RAM, HSPA+ support, Wi-Fi b/g with mobile hotspot, and GPS. Needless to say, I’m sure we’ll be seeing this on one of the lower rungs of AT&T’s pricing tiers, but that gives the HP Pre 3 some room to reach for the upper end where it belongs.We’re not quite sure if the Veer will launch with webOS 2.1, or something more advanced like 2.3, or even 3.0, but my fingers are crossed for some substantial new features one way or the other.

A launch may be as soon as May 2nd., and given all of these signs, it wouldn’t be surprising.We’ll keep our eyes peeled!

Distimo has launched their regular report on app store figures, running down the highest-ranked free and premium apps across iPhone,...