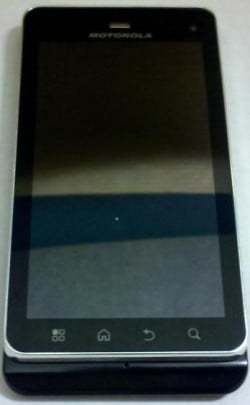 This may not be the first time we’ve caught a glimpse of the Motorola Droid 3, but it’s certainly one of the best photos we’ve seen so far of the handset’s face. While the Droid 2 wasn’t much of an upgrade from the original, the next generation of the Droid family will be kicking it a notch, bringing a far superior feature set to the table.

You’ll immediately notice that the Droid 3 will be sporting a larger display than its predecessors, and we’re glad to see it at the 4-inch mark. A display of this size is definitely the sweet spot for smartphones, as it’s not too small or too large. We wouldn’t be surprised if this turned out to be a qHD display, as newer Motorola handsets are beginning to ship with them, and it’s definitely a welcomed addition.

Accompanying the larger screen is a front-facing camera for video-chatting, which is something that’s been left out of all previous Motorola handsets on Verizon. While it’s still not a necessity for many people, the addition of a front-facing camera isn’t a bad thing to have. And, with Android 2.3.4 enabling a native video chat client through Google Talk, it’s yet another feature that will become more useful when the handset receives the update.

We’re still not sure if the Droid 3 will have support for Verizon’s 4G/LTE, but it’s entirely possible. That said, Verizon’s LTE portfolio is filling up rather quickly, and the D3 could join the ranks of the Incredible 2, and Droid X^2, which we don’t see as a problem.

We’re finally seeing the update that we wished for in the Droid 2, but it looks like the wait will be worth it. The only thing we have to wait for now, other than the full spec sheet, is to see if the handset will be running Motoblur. Sadly, it probably will, but if the handset ships with an unlockable bootloader, all may be forgiven, and we could see some Motoblur-free custom ROMs.

We like the Droid 3 more and more every time we see it. What about you?

The Android 2.3.4 Gingerbread update that was announced yesterday, which gives devices a native video chat client through Google Talk...