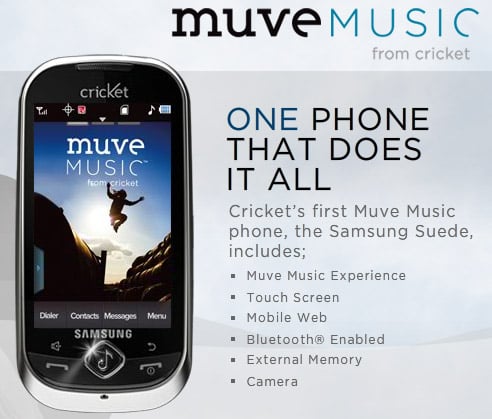 Cricket has been steadily adding new markets for its Muve Music service and voila – they are now offering it in all of its markets. The newly added markets include Fort Smith, Jonesboro and Little Rock, AR; Fresno, Merced and Visalia, CA; Macon and Savannah, GA; Boise, ID; Lincoln and Omaha, NE; Buffalo, Rochester and Syracuse, NY; Reno, NV; Fayetteville, NC; Oklahoma City and Tulsa, OK; Charleston, SC; and Spokane, WA.

Muve Music is made to work with Samsung Suede which costs $199, though prices may vary by market and by promotional programs.

Although we've seen Sammy's Galaxy S WiFi 4.0 and 5.0 at the Mobile World Congress, the Korean company made them...