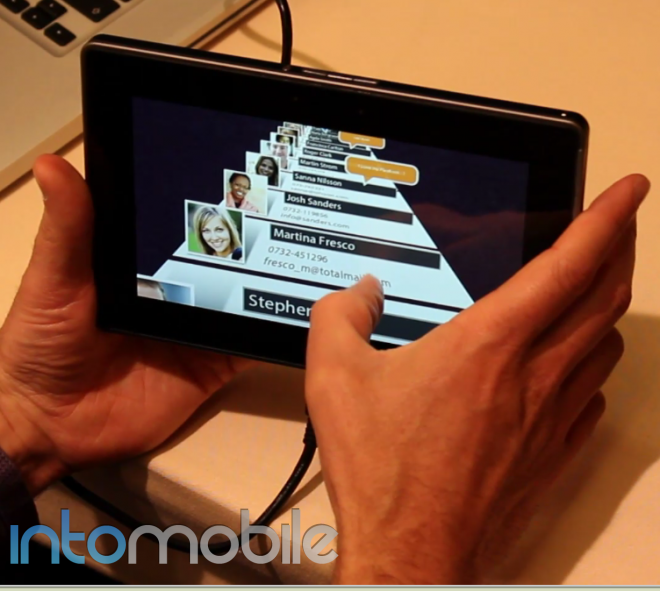 Here at the BlackBerry World conference, RIM’s Sweden team (better known as The Astonishing Tribe) has been very busy, not only pumping out the Scrapbook app we saw at Mobile World Congress for public consumption, but also doing some cool stuff with the upcoming native software development kit for the BlackBerry PlayBook. TAT has a lot of tricks up their sleeve that have already been implemented in the PlayBook’s native user interface, but once the NDK goes live this summer, application devs will be able to see, use, and edit code examples of some great UI effects. This means it will be easier for those new to the platform to create good-looking apps without needing to do a lot of legwork. In order to illustrate just what kind of effects we can expect, RIM had two PlayBook apps to show me.

One was a concept we had seen awhile back on other platforms called Horizon Contacts. At first blush, it looks like a pretty standard address book, but as soon as you tilt the device, the UI changes with it, revealing a whole hidden layer of information, such as social network status updates. They employed the same idea in their 3D home screen widgets in the Fuse concept phone made with Immersion and Synaptics. The other app is a news app that has a pretty standard scrolling bar along the bottom with flyouts coming along the top with a tap, but the really cool thing here is a the 3D globe that rotates to the place in the world where the news is happening as you tap a story.

It’s great that not only is TAT releasing its awesome creative might directly to consumers through App World (and will be continuing to do so), but that its expertise will be spreading like a virus of awesome to interested BlackBerry PlayBook developers. The native SDK for the BlackBerry PlayBook is going live this summer, presumably with some TAT code examples, and no doubt these cool UI tricks will be coming to RIM’s smartphones once they go dual-core and start running QNX.

We’re going to have more videos shortly, so keep checking because you’ll witness RIM’s revolutionary vision for the future of beard-pulling apps for the first time.

Google Earth has been a joy to use on the iPad but the search giant has finally optimized the app...