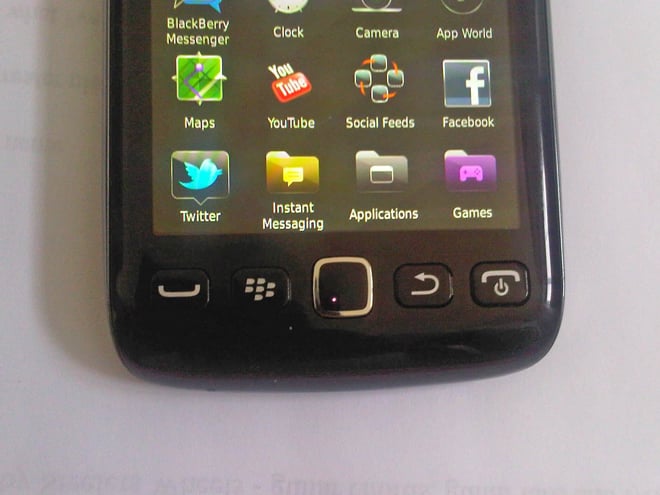 A quick shot of the BlackBerry 9860 (code-named Monaco or Monza) has snuck out recently, giving us a close-up of the hardware keys along the bottom. RIM has two touchscreen slates on the roadmap, and the Touch 9860 will be the higher-end among them. The Curve Touch will be a bit smaller, but the hardware keys will be more seamless and built right into the device face à la Storm2. There’s also a side-by-side shot that shows the 9860 next to the 9900, and they look like they’re just about the same thickness. By the looks of it, this particular model is coming to Rogers alongside the 9900, but we hear T-Mobile is getting it too.

The BlackBerry 9860 will share a lot of characteristics with the Bold 9900 announced last week; based on what we’ve seen in leaked roadmaps, it’ll have the same 1.2 GHz processor, 5 megapixel camera with 720p video recording, Wi-Fi b/g/n with mobile hotspot, NFC capabilities and a magnetic compass for augmented reality apps. The biggest departure will be the 3.7-inch 800 x 480 touchscreen – the biggest and highest-resolution screen RIM has released to date. release is expected later this summer.

If that pans out, we won’t have to wait long to see a wider variety of BlackBerry devices that meet the same caliber set by the Bold 9900. Anyone out there hankering to ditch the classic physical keyboard for a bigger display?

Those of you into music, and more specifically music videos, will have probably heard of Vevo. They offer over 25,000...