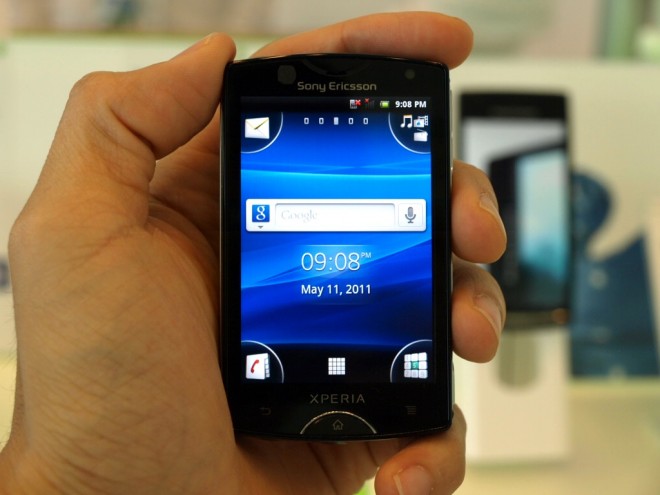 Alongside all the whiz-bang tech coming out of Google I/O 2011, Sony Ericsson came to the developer-focused conference to show off their new, pint-sized Android smartphones – the Sony Ericsson XPERIA Mini and XPERIA Mini Pro. In an age where smartphone displays seem to be getting bigger and bigger (and pushing the limits of pocketability), the new XPERIA Mini and Mini Pro are decidedly bucking that trend. With 3-inch displays and form-factors that literally allow you to put the power of a high-end smartphone in the palm of your hand, the new line of small XPERIA phones packs a big punch into a tiny package.

The Mini and Mini Pro are designed to be extremely pocketable without compromising the kind of performance that savvy smartphone users are used to these days. The Mini rocks a slate-style form-factor, while the Mini Pro is basically the same phone with an added front-facing camera and slide-out QWERTY keyboard. Both phones feature a 3-inch (320×480) capacitive touchscreen that thankfully supports multitouch inputs and makes use of Sony’s Bravia Reality Engine. The miniature smartphone duo also sports a 1GHz Qualcomm Snapdragon processor to keep things running smoothly, a 5-megapixel camera (with LED flash) that’s capable of recording 720p HD video, a hot-swappable microSD card slot, a 3.5mm headphone jack, and runs the Android 2.3 Gingerbread OS skinned with Sony Ericsson’s custom UX layer.

We’re happy to say that Sony Ericsson has decided to de-couple the Timescape and Mediascape apps from the user interface. Whereas the XPERIA X10 suffered from performance issues related to the always-on Timescape and Mediascape apps, the new Mini and Mini Pro performed admirably. The new UI is designed to be used by a single thumb, and places apps in “hot corners” of the homescreen (up to four apps per corner). When you tap the corner, the hot corner expands and allows you to scroll through and choose your app-destiny. The virtual keyboard is almost unusable for extending typing sessions, but gets the job done for short text-input tasks. The Mini Pro’s QWERTY keyboard makes a huge difference in usability, and we’d likely choose the Mini Pro over the Mini for this reason alone.

As for in-hand feel, there’s really nothing quite like the Mini or Mini Pro (save for maybe the HP Veer). Both phones fit in the palm of the hand – heck, those of you with big hands might be able to close your fist around the Mini. That’s really small. And, because the devices are so small, they feel solid. We’ll stop short of saying that it feels like a premium product, but it sure did leave a good impression.

As for performance, the Android 2.3 Gingerbread OS combined with a snappy Snapdragon processor endow the Mini and Mini Pro with the guts to go head-to-head with other higher-end smartphones on market today.

We’re looking for both of these pieces of hardware to go live in Q3 2011. Price is not yet known.