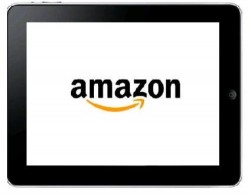 The rumors of Amazon making its own tablet are heating up, and we may have just received our first hint from CEO Jeff Bezos himself. The comment doesn’t reveal anything, actually, but at least Bezos didn’t say no.

When asked about a tablet device in the companies’ future, Bezos simply said, “stay tuned.”

It would make sense for Amazon to make a tablet, especially with its own Android application store and cloud-based music storage service. With the right tools under its belt, Amazon stands to bring a compelling device to market. The only question is if it will ever see the light of day.

Bezos assures that the Kindle won’t be going anywhere anytime soon, so this could mean that the Kindle family may expand, if anything. It would actually be surprising if Amazon didn’t release a tablet of some sort in the near future. The tablet market may still be dominated by Apple for the foreseeable future, but the market itself is still relatively new, and has plenty of room for more competition.

“We will always be very mindful that we will want a dedicated reading device. In terms of any other product introductions, I shouldn’t answer.” says Bezos

Does this confirm at an Amazon tablet in the future? Hardly, but you still shouldn’t be too surprised if a “Kindle tablet” is announced sometime this year. Rumored for a summer release, and built by Samsung, we could see the device hit some time in the very near future.

If the rumor turns out to be true, it will be interesting to see who the tablet is built to compete with. Could the it just be gunning for the nookColor, or is Amazon cooking something up to take on the likes of Apple, Samsung, and the hoards of other tablets that are set to hit the market this year?

Of course, this is mostly speculation, but what do you think? Do you believe Amazon is going to get into the tablet market? Leave your comments below!

HTC MyTouch 4G Coming to Canada as Panache on Mobilicity

The HSPA+ enabled MyTouch 4G is finding its way north of the border soon, care of Mobilicity. Dubbed the HTC...