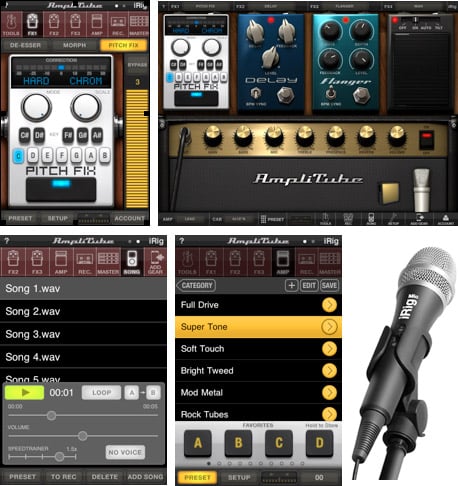 IK Multimedia updated its flagship iOS app AmpliTube with vocal effects support. Version 2.2 is available as a free update to the existing app users, who will be able to get (buy) five vocal effects from VocaLive app.

The new vocal effects now available inside AmpliTube 2.2 (as in-app purchases) include Choir (a 3-part harmonizer), Morph (a pitch and formant shifter), Pitch Fix (an automatic tuner for correction or production effects), Double (a voice doubler) and De-Esser. Moreover, there’s the vocal canceller features (NO VOICE) from VocaLive, which is added to the SpeedTrainer interface and which can be used not only to remove the vocal from an existing track, but also to remove the guitar solo.

Additionally, AmpliTube 2.2 includes an enhanced preset system for managing all of your sounds. Presets are now organized in a folder-panel system to make storing, finding and recalling your library of sounds even easier. Dedicated “favorites” buttons with ten available banks can store up to 40 most used presets for instant recall. And when the entire AmpliTube Fender gear bundle or the entire VocaLive effects bundle are purchased, the new preset system will also show their related presets.