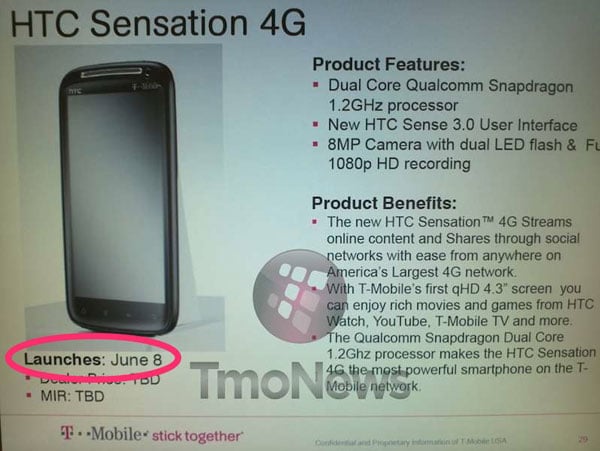 Despite pretty much rock-solid evidence pointing to the HTC Sensation 4G launch date and price, we still have to file this under “rumors,” cause there are no official documents from T-Mobile USA confirming the story. However, it seems the carrier will start selling the Android smartphone on June 8th. That’s at least according to the leaked document, showing HTC’s all-touchscreen baby along with the mentioned date. Moreover, TmoNews got a Target placard with June 12th as the launch date, hinting us the “still owned by Deutsche Telekom” mobile operator will get itself a 4-day head start with the Sensation. The same Target document also shows the Sensation’s price – it’s $199, which is pretty much in line with our expectations.

As a reminder, the HTC Sensation 4G rocks a large 4.3-inch qHD (540×960 pixels) capacitive touchscreen, HSPA+ and Wi-Fi connectivity, Qualcomm’s dual-core 1.2GHz processor, 8-megapixel camera with dual-LED flash and full HD video recording capability, while Android 2.3 Gingerbread is running the show. In a nutshell, it’s one of the most powerful smartphones announced to date and boy are we looking forward to test it out. 😉