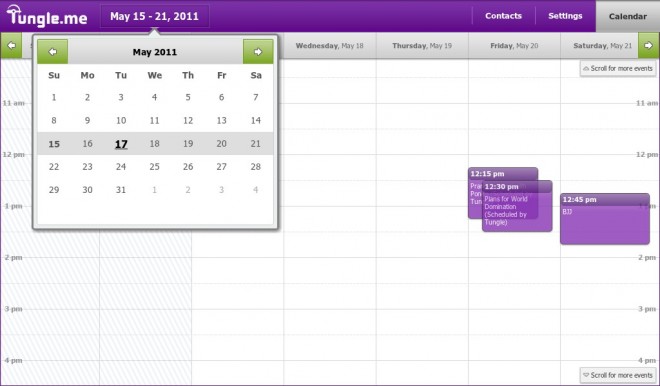 It’s a shame that the BlackBerry PlayBook didn’t launch with a calendar app of its own without the help of a RIM smartphone paired via Bridge, but it looks like a solid stand-in has become available until an official standalone app lands this summer. Tungle released their cloud-based calendar app over the weekend for the PlayBook, enabling owners to make and confirm appointments without the help of Bluetooth. Even though Bridge isn’t in the picture, Tungle syncs with Google Calendars, Outlook, iCal, LotusNotes, Windows Live and Yahoo! calendars, which can then sync with your smartphone via built-in BIS and BES services. In fact, those cloud services are pretty universal, and could make the PlayBook a valid scheduling companion no matter which smartphone you use.

The big selling point of Tungle is that it enables you to share your availability, so those proposing meeting times will be able to work within your windows right off the bat – this also avoids double-bookings. Invitees don’t even have to be registered with Tungle to propose meeting times, and time zones are adjusted automatically. The PlayBook app runs very smoothly with plenty of nice transitions, and since all invites and changes go through e-mail, you get notifications when Bridged right away.

If the name sounds suspiciously familiar, it’s because RIM had announced that they were acquiring Tungle a few weeks ago. That being said, it wouldn’t be surprising to see a lot of Tungle’s features eventually become included in the native PlayBook and BlackBerry smartphone apps.

While I might not use the handset app, Tungle is so far the best calendar option for the PlayBook, and until RIM releases an official standalone calendar app, it’ll have to do. What would be really nice is if Gist followed suit and released something for contact management on the PlayBook. To get Tungle on your PlayBook, hit up the BlackBerry App Store – both the service and the app are free, so why not?

The BlackBerry PlayBook has had some time to simmer in North America, and now it's ready for Europe. RIM's first...