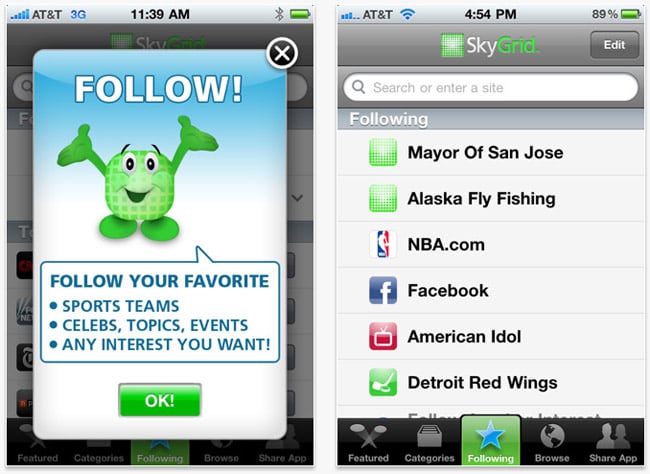 iOS news app SkyGrid is now in version 2.0, making it even easier for users to stay up-to-date on their interests. The application prides itself with the so called “following” feature, allowing users to not only follow a certain topic, but also any website.

SkyGrid 2.0 comes with a dedicated “Following” tab where all sites and subjects you care about are listed — whether it’s a sports team, a company, a product, a cause, or a noted individual. There is no limit of topics you can choose to follow simultaneously.

You should not think of SkyGrid as “yet another RSS reader” (or at least SkyGrid doesn’t want you to think like that) — it rocks a powerful technology “under the hood” which constantly searches over one million sources, including mainstream news, social websites, blogs and other content sources to serve the highest quality results. Moreover, the company’s patented algorithm “Information Velocity” also constantly finds new topics that are spreading the fastest around the world.

Finally, in addition to the improvements to the “following” feature, SkyGrid 2.0 also features suggested topics and sites, fast article page loading, rich photos throughout streams, and the ability to both search and navigate from a single site…