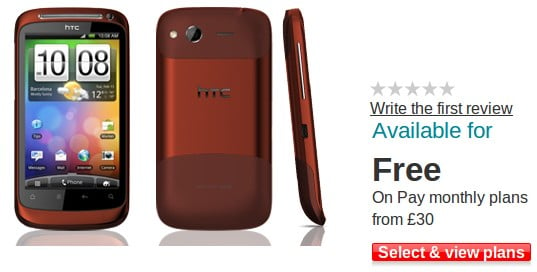 Vodafone scored the exclusive deal with HTC to sell the Desire S in red. As you can imagine, aside from a different color, the device remains the same under the hood. Likewise, the price hasn’t changed as well, meaning that interested users will still have to commit on at least 30 GBP a month two-year contract in order to get the device for free. Alternatively, there’s the 25 GBP a month option, which requires pouring out 99 GBP upfront, while also packing less minutes and texts.

As a reminder, the HTC Desire S is most famous for its rotatable buttons which change direction based on how you hold the phone. Specs wise, it comes with a 3.7-inch WVGA capacitive touchscreen, Qualcomm’s single-core 1GHz processor, 1.1GB of ROM, 5-megapixel camera with auto-focus and LED flash, HSPA and Wi-Fi connectivity, GPS and a memory card slot.

You can get the red HTC Desire S from this page on Vodafone’s website.