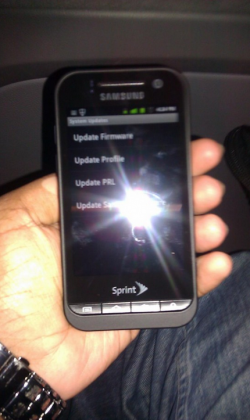 In addition the handful of new handsets coming from Samsung lately, the manufacturer will be producing another budget Android device and it’s set to land on Sprint sometime in the future. While this wouldn’t challenge the EVO 3D or Nexus S 4G, the D600 has a decent spec sheet that should appeal to the demographic it’s aiming for.

The D600 is expected to ship with a 1GHz processor, unknown display size with a resolution of 480 x 320, 3.2 megapixel rear camera, front-facing camera for video chat, WiMAX support, and Android 2.3.3 Gingerbread. While the screen resolution and camera don’t scream high-end, the rest of the specs don’t sounds all that bad.

The hottest hardware last year is now becoming the budget hardware of this year and the D600 is proof of that, give or take a few features. Given the specs of the handset we could imagine that it will sell on the cheap, and since it’s a WiMAX supported device it may sell rather well. We’d be surprised if we saw this handset sell for more than $120 on a new contract with Sprint but we’d hardly expect it to be free.

Samsung has done a pretty good job at saturating the market with its devices in all areas. From the Galaxy S mini to the Galaxy S 2, Sammy has covered a lot of ground to compete with everyone on all levels.

There’s no firm date as to when we will see the D600 grace Sprint’s shelves but since the thing passed through the FCC in the beginning of the month, it could launch sooner rather than later. Or not.

We’re still impatiently awaiting the official announced me for the Galaxy S 2’s availability in the US, but some of you may have your sights set on this upcoming, affordable handset instead.

We’ll be sure to keep an eye out for the D600, as Sprint and Samsung may have a budget hit on their hands.

The LG Revolution is the third smartphone for Verizon that can use the 4G LTE network. In our review, we'll...