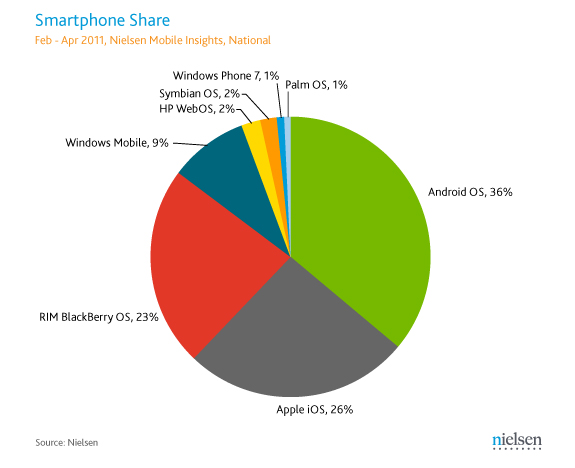 Nielsen has recently reported the results of their U.S. smartphone market research for April, and concluded that Android now has a 36% share out of all smartphone OSes, with iOS claiming 26%, and BlackBerry 23%. That’s pretty good for Android, but Nielsen has reported that Android has held the same portion for the last three months, indicating that the growth of Google’s mobile operating system is starting to plateau. Gartner might disagree, since they see Android taking over the world by the end of 2013. For November-January, Nielsen reported that Android had claimed 29% market share, which is 7% jump in four months, in any case.

This survey also introduced some information on data usage, showing those on Android use on average 582 MB, iPhone users gobble up 492 MB, and BlackBerry owners only 127 MB monthly. The vast majority across all platforms was spent on downloading apps, followed distantly by streaming music, mobile TV, full track downloads, and online gaming. I’m not entirely sure that BlackBerry sitting on the bottom rung of data usage necessarily translates to a lack of usage, though; RIM’s servers compress a whole lot of data, and carriers can effectively support three BlackBerry devices for one of anything else. Of course, both Android and iPhone app stores are ripe with selection, so it’s no surprise to see them leading in data usage.

While we tend to get hung up on straight operating system market share as a rubric for success, there are a lot of other different kinds of market share to take into account, like units sold, profits, installed base… The comparison gets further muddled when you consider Android is tackling the market through multiple vendors, iOS is being pumped through multiple product categories, and BlackBerry is one platform for one device. For a more comprehensive view on market share, take a look at this amalgamated vendor index cooked up by Asymco to see how manufacturers stack up against one another.

In any case, what do you guys think – has Android’s meteoric rise finally started to peter out?

Man makes an Android app to propose his girlfriend

What's the best way a geek can propose a girlfriend? Using an iPhone? That's so last year. How about making...