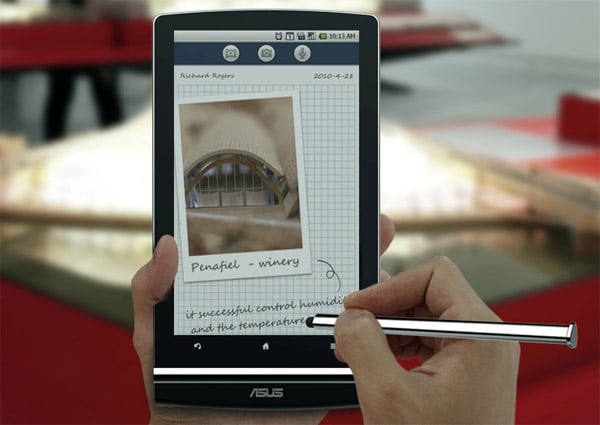 As it turns out, ViewSonic wasn’t the only one with a 7-inch Android 3.0 tablet yesterday at Computex. Alongside their 10-inch handset-eating Padfone, Asus was showing off the Ee Pad MeMO 3D, which also runs Honeycomb, but has the added bonus of sporting a 3D display with no glasses needed. This tablet’s been making the rounds since CES, but a few more details have bubbled up since then

According to some hands-on time from the show, the screen is 1280 x 800 in resolution, has HDMI-out, a microUSB slot with hosting capabilities,1.3 megapixel shooter on the front, 5 megapixel camera on the back, 1 GB of RAM, 32 GB of storage and a 1.2 GHz Qualcomm processor. Included in the package is a built-in capacitive stylus for note-taking in portrait mode, but the most interesting ability of all is for the tablet to share its 3G voice connection with a Bluetooth-paired handset, as well as stream music and remote control the tablet. It would be kind of weird making a call on a phone without a handset, but that’s what would happen in this coupling scheme.

There’s a lot of interesting things going on with this tablet, but it wouldn’t be surprising to see this as a Chinese or Japanese exclusive. Pricing is expected to be in the $499 – $699 neighbourhood and should be launching sometime in Q4 (likely in June) – we’ll keep our eyes peeled!

It looks like the Android slider spotted in AT&T's roadmap the other day has gone official. The Pantech Crossover is...