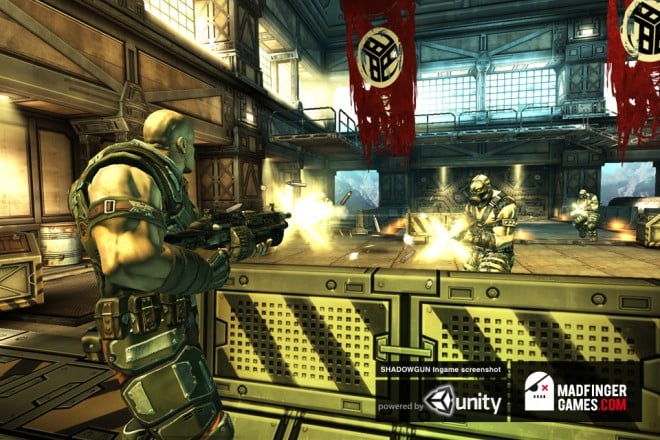 Madfinger Games has recently announced a title for mobile called Shadowgun, which looks to be a rich shoot-’em-up for Android. Nvidia is currently using the game engine to demo the Nvidia Tegra 2 dual-core processor, but it will be fully ready to take advantage of quad-core Kel-El processor when it’s ready.

We’ve already seen what Kal-El can do under relatively tame circumstances, but I would love to see it put to the test with some fast-paced first-person shooter combat. Considering quad-core computing is still something of a rarity on most desktop computers, it’s easy to think it will take awhile before it reaches mobile, but Nvidia says they’re on track to release Kal-El on a tablet in August.

Shadowfinger was built using the Unity Engine, and seeing as RIM has recently announced support for the development environment, I would hope the BlackBerry PlayBook gets a port soon, along with Android tablets and smartphones. iOS is mentioned as well, but with a game that slick, it’s not surprising that they’d do a port to iPhone and iPad what with how much money there is to be made in the App Store.

Mobile gaming has grown by leaps and bounds the last couple of years, but it’s really starting to look like the technology will really enable console-quality games, forcing folks to make a decision about whether they want to go for a multipurpose device, or stick with a dedicated system to get their jollies. Would you guys pick a high-spec quad-core tablet over an Xbox with games like Shadowgun available?

Anyway, here’s a quick look at the game in its current state. Looks great on the big screen, eh?