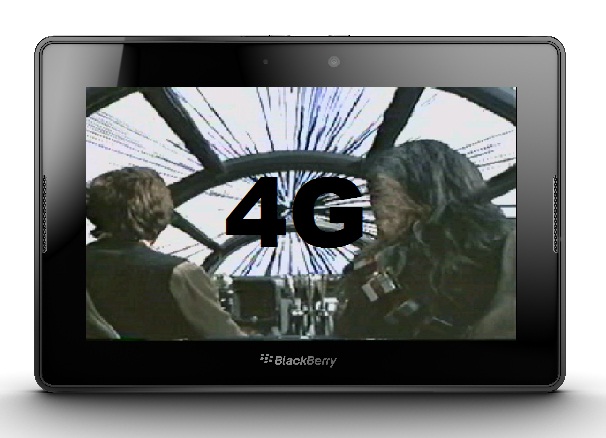 RIM has already gone on the record saying that we could expect BlackBerry tablets in varying sizes, and recently we’ve been handed a short list of what to expect in the next PlayBook. The next model, which should have a 10-inch screen rather than 7 like the original, will have 4G connectivity and Wi-Fi, but skip 3G altogether. Both black and white models will be available, and have a slimmer touch-sensitive bezel outside the screen. The PlayBook 2 will also be able to connect to BlackBerry Enterprise Server without having to go through the Bridge pairing process with a RIM smartphone. None of these rumours are documented with proof, so take it all lightly.

It’s probably a safe bet that the next PlayBook will match the current one on most specs: 1024 x 600 display with HDMI-out, Wi-Fi b/g/n  with DLNA home media sharing coming soon, a dual-core 1 GHz processor, a 5 megapixel camera on the back and 3 megapixel camera on the front, both capable of capturing 1080p video.  Check out my review of the PlayBook to get a sense of what the next one will be like.

While the definition of “4G” has been mutilated to include HSPA+, the exclusion of 3G connectivity might not be such a big deal, but if it’s referring to LTE or WiMAX, then those outside of major urban centers will have to be content with cruising on Wi-Fi. I trust the new model will be competitively priced, but as is tablets are an expensive endeavor both for consumers and manufacturers. Having a truly enterprise-ready tablet will be good for RIM in any case; the iPad has had a significant head start in winning the hearts of businesses, and BlackBerry has some home turf to defend.

In any case, HSPA+, WiMAX, and LTE versions of the 7-inch PlayBook are due this summer; given the option, would you stick with the smaller screen, or hold out for the 10-inch version?

Qualcomm is taking some subtle jabs at its competitors in its latest video, as the company is showing off how...