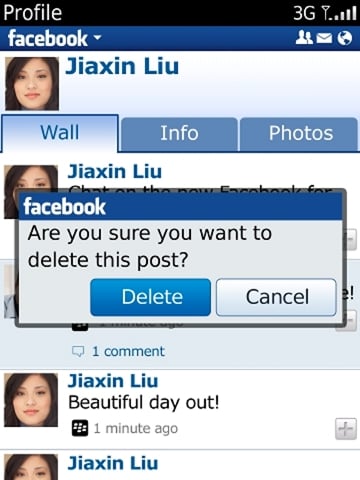 The Facebook app for BlackBerry smartphones is getting a long-awaited feature: wall post deletions. On top of that, Facebook 2.0 beta 3 will also include support over Wi-Fi networks, and the option to only delete items on the device, but not on the web. That last one’s a weird addition, but it’s a format already well established for BlackBerry e-mail, so might as well bring it to this app too.

Before this, Facebook for BlackBerry had a big update to 2.0, which most prominently included the addition of Chat, and a significant user interface overhaul. As always, the app lets you peruse the news feed to see what your friends are up to, upload pictures directly from your phone’s camera, post your own updates, and get push notifications of new wall posts or direct messages.

Every once in awhile I would get redundant or excessive updates trickling down to Facebook through Twitter, Foursquare, or elsewhere, and not being able to delete them from my phone had been a bit of a hassle. The addition of the deletion feature is a solid one, though a bit of a no-brainer. Wi-Fi support also seems like something RIM should have included from the get-go, but there you go.

To try out the latest version, hit up the BlackBerry Beta Zone to sign up.

RIM has already gone on the record saying that we could expect BlackBerry tablets in varying sizes, and recently we've...