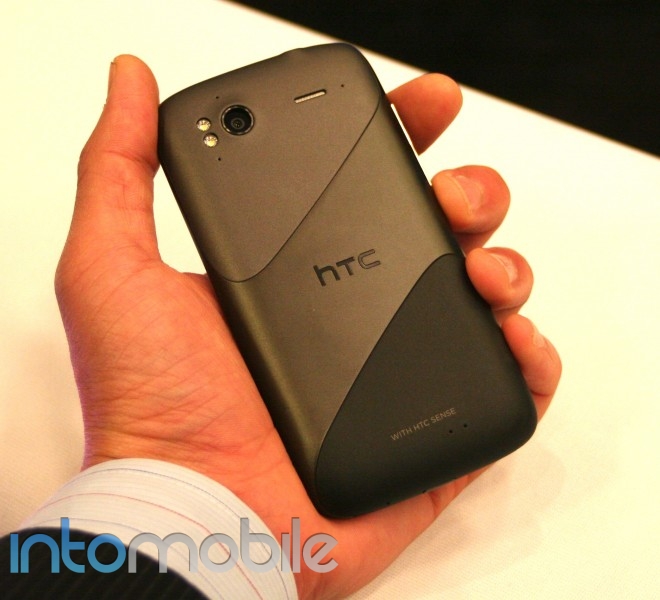 You’re probably going to have to wait until June 15 to get your hands on the T-Mobile HTC Sensation 4G but we were able to get our hands on one a little early and wanted to give you a taste. A full review will be coming shortly but I thought it would be fun to share some of my initial impressions.

The T-Mobile HTC Sensation 4G absolutely feels like a high-quality device when you’re holding it – it’s light but not too light, the brushed plastic back feels comfortable in the hand without feeling cheap and the 4.3-inch qHD display is a joy to look at. Unlike some of the larger phones out there, this one has a 16:9 display ratio, so it feels slimmer and smaller than some of the giant-sized competition.

The company did some interesting thing with the back casing, as it sports radios inside of it and comes off in a single body piece. It’s tough to describe but watch the video below to see how HTC even brings innovation to battery cases.

Inside, the T-Mobile HTC Sensation 4G should have all the power you need with the dual-core 1.2 GHz Snapdragon processor. Apps launched quickly without stuttering and the new Sense UI ran like a dream. That chipset also means the 8-megapixel camera with dual-LED flash can record in full 1080p HD, which has been available on competing devices like the T-Mobile G2x.

The handset will launch with Android 2.3 that has Sense UI layered on top, support for up to 14.4 Mbps download speeds on T-Mobile’s 4G network, WiFi,Bluetooth, GPS and all the other goodies you’d expect from a device of this class. It’s still early in the summer but the T-Mobile HTC Sensation 4G is looking like one of the best smartphones out there unless you don’t like Sense.

Any of you planning to pick this up for $199 when it lands in a couple weeks? Let us know what you’d like to hear about in the review.

We've been hearing that the HTC EVO 3D for Sprint would be landing sometime this month, but it looks like...