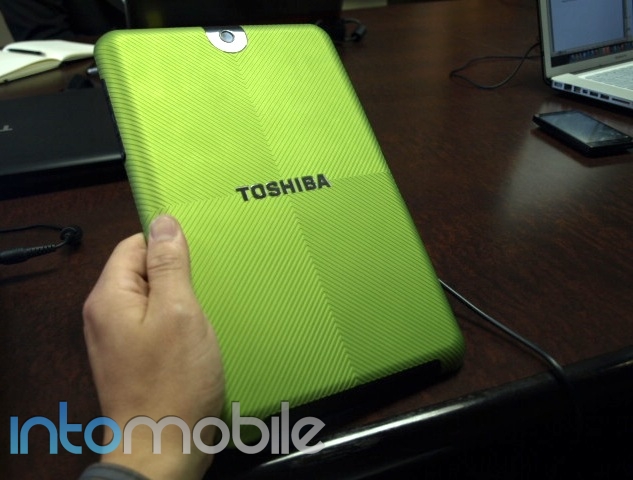 We had some time to get our hands on the Toshiba Thrive Android 3.1 tablet and this thing has a few unique hardware and software features which should make it stand out from the crowd.

The company said it sees this space as an evolution in computing but that doesn’t mean that people are ready to break away from the things they’re comfortable with. Because of this, the Toshiba Thrive Android 3.1 tablet rocks full-size ports for USB, HDMI and a microUSB card. This can be accesses by moving a plastic flap on the bottom.

Unlike devices like the Xoom, this has been built to hold in the portrait mode as the front-facing 2-megapixel camera and the 5-megapixel rear camera are on the top of the device when you hold it that way. The left spine has the speakers and a full docking port and the bottom also has a headphone and AC port to go along with the full-size ports. On the left side there is a full-sized SD card to go along with an orientation lock button, volume rocker and the power and unlock button.

The top of the Toshiba Thrive has a sliding button which lets you lock on the backing. That’s right, the back plate can come off and these come in different colors and feature a cool grooved surface. This also means you can have a replaceable battery but the company put in a quick-charge technology that can get you up to 90 percent charge in about an hour of being plugged in.

The Toshiba Thrive Android 3.1 tablet has a 10.1 inch display (1280 x 800) and the company has thrown in its Resolution Plus technology to enhance videos when they’re upscaled. We saw a few demonstrations of this and it looked pretty darn good.

Video is up and it has another funky background. I also noticed I messed up and said “.6 ounces” instead of “.6 inches.” Sorry friends, it was a long day.

How Apple iOS 5.0 copies the competition