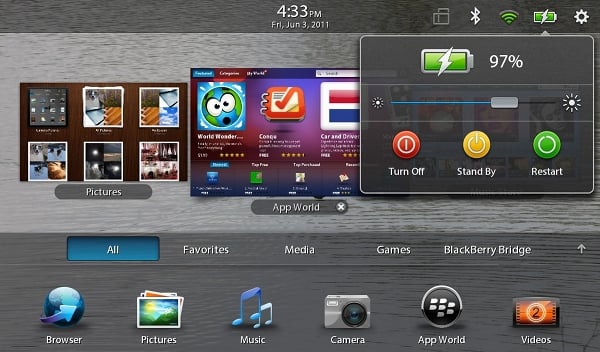 The BlackBerry PlayBook tablet received a sizeable operating system upgrade this morning. OS 1.0.5 covered a smattering of user-facing improvements, such as providing in-app payments in App World, enabling developers to earn a little bit more through incremental purchases in existing apps. Tapping the battery icon now lets you adjust screen brightness, and power down, restart, or put the device to sleep. The PlayBook will also let you know if your charger won’t work, which is bound to happen if you mix up the microUSBs for the purpose-built charger and your BlackBerry smartphone’s. Apparently you couldn’t charge the thing before when it was turned off, but that’s not a problem anymore. Video chat has been improved so you don’t have as many issues calling from public and enterprise Wi-Fi networks. Speaking of Wi-Fi, this update will include automatic network detection, making it easy to connect to whatever’s in range. Finally, there’s a swath of new language support: French, Italian, Dutch, German, Spanish and UK English.

If you haven’t had a chance to check out the PlayBook, it’s RIM’s first tablet, and packs quite a bit of horsepower – 1 GHz dual-core TI OMAP 4430 processor and 1 GB of RAM, to be exact. The screen is a portable 7 inches and can handle HD video with a 1024 x 600 resolution. There’s a 3 and 5 megapixel camera on there, primarily suited for handling video rather than stills. App selection is improving steadily since launch, and it’s expected to explode once Android apps become available. Bridge still forces you to have a BlackBerry smartphone paired up over Bluetooth if you want to access that native RIM-built Messages, Calendar, Contacts, or Memo apps, but stand-alone versions should be launching this summer. Check out our full review of the PlayBook here.

Having a software-based standby button is a great addition, since the PlayBook’s hardware power button is recessed and hard to get to easily. All of the other stuff are nice gaps to fill, though not particularly exciting. To get update, make sure your tablet’s plugged in for power and connected to a Wi-Fi network. Then tap the gear in the top right-, tap the Software Updates tab on the left side, and Check for Updates in the middle. After that it’s just a quick download, install, and reboot.

HTC Flyer gets a small updated to “improve system performance”

HTC has released a small update for its Android tablet - Flyer. Don't expect the latest Honeycomb features, only under...