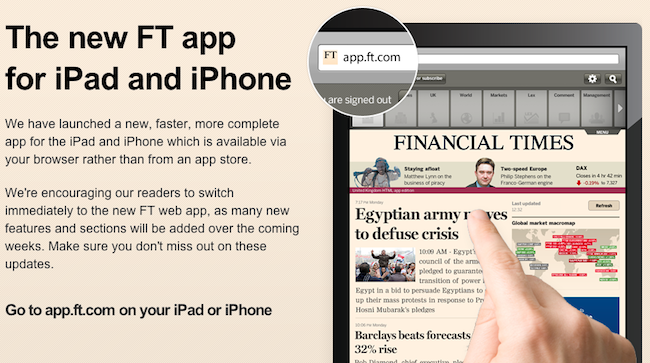 Something important is going to happen at the end of this month. Newspapers and magazines currently offering iPad and iOS applications that require you to pay for a subscription via a method other than iTunes will get kicked out of the App Store. You read that right, Apple wants to not only take 30% of revenues from developers, but also content producers. Some publishers have caved in and accepted Apple’s terms, most notably Condé Nast, who has The New Yorker, Vanity Fair, GQ, Wired, Glamour, Golf Digest, Allure and Sel, as well as Hearst, who does Esquire, Popular Mechanics and O, The Oprah Magazine. The Financial Times however doesn’t want to play by Apple’s rules. Today they launched a new iOS optimized website, app.ft.com, that bypasses the need for them to distribute their content through the App Store. They say they’re still going to offer their iPad app until Apple takes it down. It’s a brave move, make no mistake, but we think a compromise needs to be reached.

Developers spend their working days writing an application that once done is published to the App Store and then starts generating revenue. Over time said developer can fix bugs, add a new feature or two, but they’re not writing a whole new app every month, like some magazines, or even every week, such as The Economist does. The 30% revenue share for apps and in app purchases, we understand, but magazines and newspapers need their own special offer, say 10%. This will become increasingly important as iOS 5 launches this fall and one of the main features it has onboard is a dedicated app called “Newsstand” that acts as a central point to access all the periodicals you’re subscribed to.

With in-app purchases getting increasingly popular among iOS developers, it's easy to spend a small fortune on extra functionalities modern...