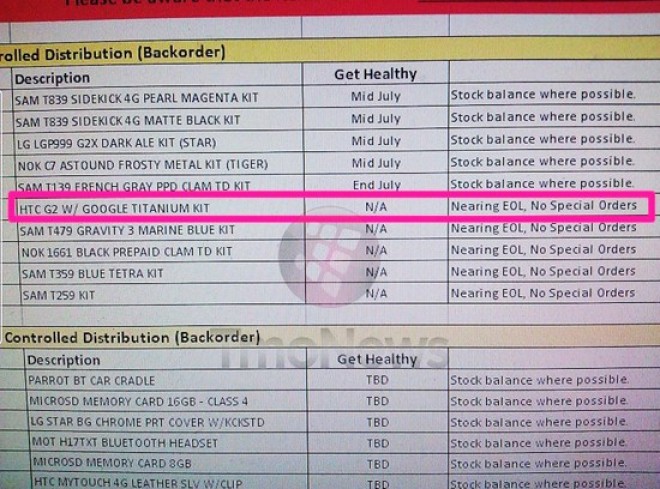 Well this is interesting, if not a bit disappointing. Apparently the T-Mobile G2 may be seeing its end of life soon according to a T-Mobile document. While no specific date has been released, the handset hasn’t even been out a full year and Magenta is already talking about its death.

Whether it’s the slower than average processor clocked at 800MHz that’s turning people away, or T-Mobile just has better offerings, the G2 is still a great handset that I personally believe should stick around. The processor used in the handset, the Qualcomm MSM7230, can natively run at 1GHz and why HTC chose to under clock the CPU is beyond us. Nonetheless, despite its clock speed, I still miss the G2 over my G2X.

Currently, you can’t find the T-Mobile G2 on Magenta’s website, and we have our doubts that it’s because that it’s selling so well, like the G2X. It just seems pretty interesting that the handset is being killed off and it still has received a real update, although it’s on its way, apparently. Whatever the case, the G2 is still a relatively young phone, but that’s how technology goes these days, I guess.

With devices like the MyTouch Slide 4G on its way to T-Mobile, users may another option with much better specs than the G2. Still, those looking for a stock Android device with a physical keyboard are SOL, it seems. Hopefully one of the devices in T-Mobile’s leaked roadmap will be a reboot of the handset.

With virtually every new handset now shipping with a dual-core processor these days, seeing a 800MHz processor may look downright slow to some people now, which is why Magenta may not be taking any special orders for the device now.

Even if it’s been a short one, the G2 hopefully had a good life and may it soon get Android 2.3 Gingerbread, finally.

OnLive cloud gaming for Android and iOS launching in fall

OnLive has been quietly building up steam over the last year for their cloud-based mobile gaming service, and they're just...