Our friends over at Pocket-Now has received some leaked shots of what should turn out to the be the Nokia N9 and these devices look pretty darn slick but it’s a shame that these will probably be running MeeGo.

We expect the Nokia N9 to be announced very soon (it’s being announced in Singapore on Tuesday), as the company said it will unveil a “market disrupting device.” Previous leaks of the device showed a slide-out keyboard that kind of resembled a MacBook but the press shots below clearly indicate a full touch slate device. 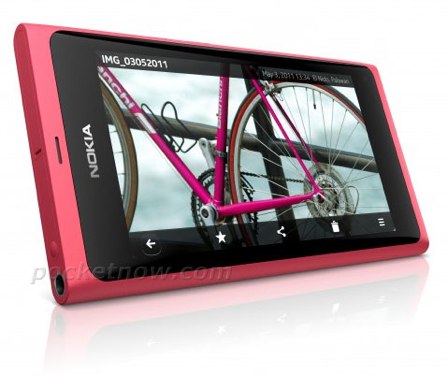 The Nokia N9 should be just as slick as the other full touch devices out there but it could be DOA because it’s expected to run MeeGo. MeeGo was the joint platform of Nokia and Intel but Nokia then decided it wasn’t worth pursuing, so it chose to use Windows Phone as its platform of choice moving forward.

Because of that, Nokia N9 owners shouldn’t be expecting much in terms of support. The world’s largest handset maker said that it will use the platform as an experiment in user interface and more but I don’t know how much consumers want to be experimented on. If nothing else, this will become a collector’s item. We’ve also heard reports that the company will only be making 92,000 units of this, so it will be quite a rare device.

There is a case to be made for MeeGo but I don’t think it will be with the Nokia N9. Intel will definitely continue to fund and push this platform but until a major handset maker jumps on board, I doubt it will be receiving much app support.

Any of you excited about this device? Any of you out there really believe that MeeGo will become a force that can compete with iOS, Android and Windows Phone?

This bad boy, the same one that made headlines when leaked as the HTC Doubleshot, now goes by the name...