The first dual-core LTE handset for Verizon has been spotted with a new design that’s certainly more appealing than its previous clunky hardware we saw earlier this year. Oddly enough, the Droid Bionic’s redesign is so drastic it looks as if Motorola has just repackaged the handset into another existing design, which looks somewhat similar to the Targa we saw some time ago.

Many people have been waiting for the Bionic to arrive before they jump into grabbing a LTE handset for its dual-core processor. Whether or not the handset itself has switched to the TI OMAP processor is still up in the air but it looks like we’ll find out soon enough.

The original design of the Bionic was thick and clunky but the phone above looks anything but a chunker. We can still image that the handset itself may be on the thicker side but that’s likely due to the LTE modem. Either way, those we were turned off by the Bionic’s original design will certainly be surprised with its shiny new outfit.

Locked bootloaders aside, I’m just not impressed with Motorola as much as I used to be. While its designs have been refined over the past couple of years, the overall look remains the same for Moto handsets. Of course design isn’t everything but it’s a huge factor since you have to look at the thing every day. Throw in the fact that this phone will ship with Motoblur and I’m done.

Either way, it looks like Motorola may indeed have a hit on its hands with the Bionic. We won’t be surprised with Verizon and Motorola push this handset harder than any previous handset before and with a tagline like, ” You control it. You control everything.” you can expect the full-on ad assault to hype the handset up.

Who’s grabbing the Bionic when it comes out? 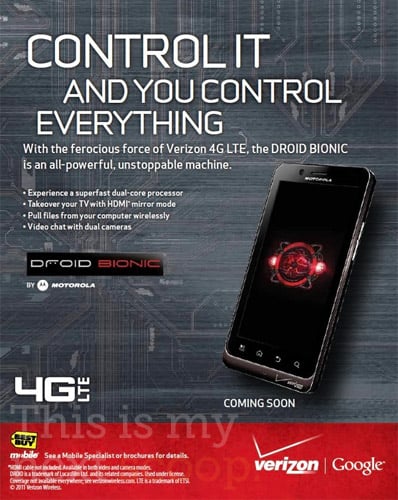 Foursquare has been busy lately, first with their updated Windows Phone app, and now a new notification system for their...