Okay, to be fair, I’ve only been using the HP TouchPad for a week, so saying I couldn’t live with some of these webOS apps might be a little bit of an overstatement. In fact, I can say with some certainty that I would not spontaneously keel over and die if any one of them was pulled from the App Catalog. What I can say is that these apps are all very good! webOS is still new to the world of tablets, so there aren’t many that are optimized for the 9.7-inch screen. Let’s pick out some of the highlights of what’s available. 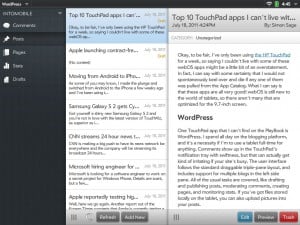 One TouchPad app that I can’t find on the PlayBook is WordPress. I spend all day on the blogging platform, and it’s a necessity if I’m to use a tablet full-time for anything. Comments show up in the TouchPad’s notification tray with swiftness, but that can actually get kind of irritating if your site’s busy. The user interface follows the standard draggable triple-pane layout, and includes support for multiple blogs in the left side pane. All of the usual tasks are covered, like drafting and publishing posts, moderating comments, creating pages, and monitoring stats. If you’ve got files stored locally on the tablet, you can also upload pictures into your posts. 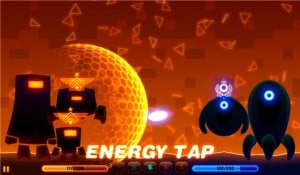 Robotek is best described as a turn-based slot machine robot combat game crossed with Risk and RPG elements. Bit of a mouthful, eh? The game plops you in a world taken over by robots, and as the last human survivor you have to reclaim territory one energy node at a time. To do so, you can summon your own robotic underlings, and employ various kinds of electronic warfare against your mechanical overlords. Combat works out as each side takes turns pulling the lever at one of three slot machines, and the results will determine the type and effectiveness of your attacks. As you progress, you gain experience points, and once you level up, you can improve the effectiveness of particular robots or weapons.

Although it’s free to download, Robotek HD runs on microtransactions. Every battle on the world map will either reward you or drain you of energy, and once you run out, you’ll have to buy more, or restart the campaign mode from scratch. That kind of sucks, but I got a solid couple of hours of gameplay before hitting bottom, and for my next round, I suspect I’ll make better progress across the map. The nice thing about making one of those energy purchases is that it unlocks a two-player versus mode, which I’ve yet to try, but is very tempting. 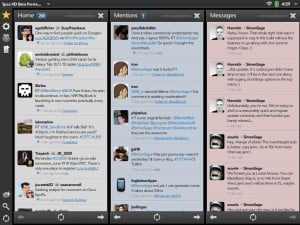 Spaz HD is currently the only serious Twitter client available on the HP TouchPad, and it performs extremely well. The original app has been on webOS some time as a free open source alternative to premium apps like Carbon, and performs equally well on smartphones. It supports all of the usual tasks, like updating your Twitter status, sending direct messages, searching for and following new people. On top of that, there’s some more advanced stuff, like multiple account support and customizable streams, but no lists just yet. I would really love to see an Exhibition mode for Spaz HD, since most of the day the TouchPad is sitting on the wireless Touchstone charging dock next to my monitor. Right now it defaults to the Facebook Exhibition, which refreshes slowly, so isn’t particularly helpful

Right now, Spaz HD is being labeled as Beta Preview 1, so I’m sure there are plenty of more features on the way. 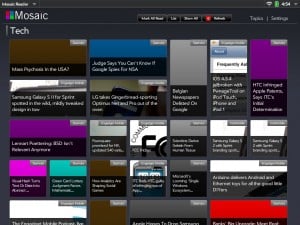 Although there’s still no real Google Reader application for the TouchPad, Mosaic is a solid stand-in. It lets you create categories of RSS feeds that, when opened, generates a rich mosaic of stories as squares and rectangles. It can get a little overwhelming in terms of volume, and not all of the squares get a graphic, but the interface is still relatively unique and a nice way to casually skim stories. Individual stories open up in an embedded web browser, from which you can Tweet a link or send it to a friend via e-mail. The favouriting system in Mosaic Reader allows you to say why you like a story so the app can serve up content more in line with your tastes.

As soon as Mosaic adds Google Reader sync, it stands to be a popular pick on webOS tablets,  unless Pulse News ever makes its way over to the platform. 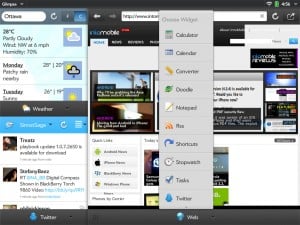 Glimpse is a new but unique app that strikes me as the perfect choice for busy multitaskers. It gives you three panes (two squares stacked on top of each other, and a larger frame on the right) which can each be assigned to a variety of different functions. The bottom of each frame lets you pick weather, YouTube, Twitter,  a selection of app shortcuts, RSS feeds, or a bunch of different productivity tools. Anyone who has tasted the nectar of Android home screen widgets will be hurting for something equally customizable on webOS, and so far Glimpse is as good as it gets. Much like Mosaic, if the RSS portion synced up with Google Reader, I would be a very happy camper.

While the widgets of Glimpse might not offer as full functionality as dedicated apps, it’s a nice multipurpose app that will serve as a good launching point for daily activities. Glimpse costs $5.00, which is a bit steep in the grand scheme of things, but so far the app has been updated regularly and is getting great reviews across the board. Like Spaz HD, I’d love to see an Exhibition mode for this app, even if it simply allowed it to stay open while charging on the Touchstone dock. 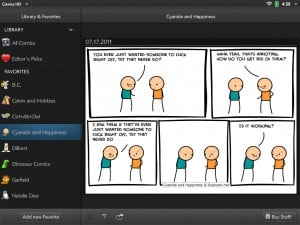 Webcomic reading is one of those things that a tablet could really excel in; it’s got a big screen to view full graphics, it’s connected so can be updated as soon as there’s a new episode, and with the right app, you can follow more than one at a time. I’ve been having a hell of time doing this on the PlayBook through BlackBerry News, but one developer has ported the smartphone version of his webOS comic app to the TouchPad. Comics HD lets you subscribe to a bunch of traditional comics, like Calvin and Hobbes, Dilbert, Ziggy, or newer ones like Cyanide and Happiness, Dinosaur Comics, Penny Arcade. There are a few titles that I’d really like to see, but luckily there’s a link to suggest new additions to the app developer. Viewing the comic itself is great; Comics HD lets you flip through archives with simple swipes, and share some of your favourites via e-mail, Facebook, or Twitter. Some feeds don’t go back particularly far, mind you, so Comics HD is best served for keeping up on the latest updates.  It would be nice to have all my comics jammed into one feed, maybe in a nice graphical layout like Mosaic, and being able to mark some favourites for update notifications would be a great addition, but as is this app is functional, free, and an excellent way to kill time. 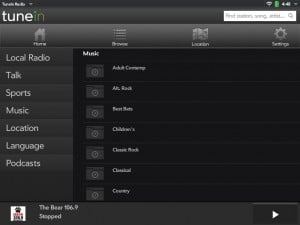 None of the established streaming music services, like Slacker, Rdio, or Pandora have made the leap to the TouchPad just yet. The smartphone apps run fine, and most of the web-based services will work in the Flash-enabled browser, but dedicated official tablet-optimized webOS apps have yet to make the leap. That’s too bad, because one of the key selling points to the HP TouchPad is the Beats-certified stereo speaker set. One developer has made a location-aware radio app, however, which lets you tune in to online streams around the world or from your neighbourhood. On top of the browsable categories like sports, music, and language, there’s also a section for audio podcasts. Any show you find can be marked as a preset so you can access it quickly from the home screen. Unfortunately, there’s no local caching and no video, so you might still want to get drPodder if you’re big on podcasts.

All-in-all, TuneIn Radio is smoothly laid out, has a great selection, and best of all, is totally free. 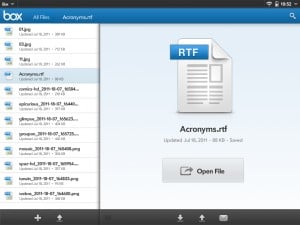 Box.net is a popular cloud storage service that specializes in document collaboration. This is a great option for small teams that need to be on the same page, and be able to keep track of revisions. There’s task assignment tools baked in to the web service, so you always know who’s supposed to be working on what, along with permissions controls so only the right people have access to particular documents. Of course, the app can be used for more casual personal stuff, like transferring music and photos to or from your TouchPad. The one downside is that there doesn’t seem to be support for uploading videos from the TouchPad, and you can only select one file at a time to send. I’ve had issues trying to get QuickOffice to read one RTF file I had loaded up, but that’s hardly Box’s fault.

Still, Box for the TouchPad is free, and so is an account complete with 50 GB of space. Not too shabby, eh? 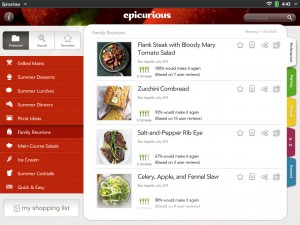 Epicurious has been a big-name destination for hardcore foodies and the casually hungry for a couple of years now, and they’ve done a bang-up job making an app for the TouchPad. The user interface is super-smooth, and stays well away from the tired three-pane layout that many apps have picked up by default.  With Epicurious, you can find recipes based on category, or specific ingredients thanks to the search bar. Tabs let you sort results based on relevance, rating, date posted, and other criteria. My favourite feature is the ability to add all of the ingredients of a dish to a shopping list, making preparation a breeze. Full reviews are listed with each recipe, and if you’re pretty sure you’ve found one you like, it can be marked as a favourite for future reference. The recipes themselves are displayed in large text, and have a big orange marker in the margin so you don’t lose your place while running around the kitchen.  You can also share recipes via e-mail, though some options for Facebook and Twitter would be nice.

Although I find some of the recipes on here to be a little daunting and geared towards ambitious cooks, the layout is fantastic, and the app is something that can prove to be useful on a daily basis. 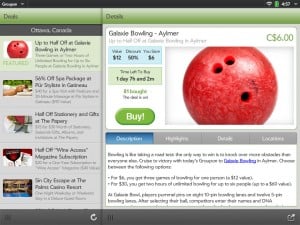 Groupon is another big name web service that aggressively pounced on the TouchPad at launch. Their app uses GPS to find deals local to your area, and updates as new ones come out and old ones expire. You can also search for Groupon sales out of town, if you’re planning a trip. Purchasing Groupon specials unfortunately doesn’t happen within the app, but rather boots you out to their web page; luckily the TouchPad’s browser is snappy enough to handle it all. The webOS app shows what you’re getting, how much you’re saving, and where it’s valid (complete with a link to the native Maps app). Sharing options are text and e-mail, which is good enough, but Facebook and Twitter would be nice additions. Given the deals cycle through pretty regularly, it would be nice to get notifications when new ones are up.

It’s free, it’s polished, and it could save you a ton of money on stuff you would normally be buying anyway.

Those are my top picks for TouchPad apps, but webOS for tablets is still fairly new, and fresh apps are hitting the catalog every day. Have you found any particular gems that make your TouchPad a worthwhile purchase? If you’re looking for more smartphone apps, be sure to take a look at our top webOS apps for 2010.

Quipster, the iOS app that wants to deliver a better way to check-in, is now updated with few new features...