Apple has just released the next iOS 5 beta to developers and it will be fun to see what new goodies this will bring over the older versions. Interestingly enough, this version is available over the air for those already running the last version of the beta.

I’m right in the middle of downloading the 142 MB iOS 5 beta 4 over Verizon’s network, so I’ll update this post once it’s finished and when I notice some changes. The cool dudes at Engadget point out that doing an OTA update will erase the pictures on your phone, so back up my friends.

We’ve already seen the major goodies of iOS 5 in previous betas including the Android-like notification bar, system-wide integration with Twitter, the iMessage service, iCloud and more. Each new beta does contain a few surprises though, although not all are guaranteed to make it to the final version, which is still on track to hit the public in Fall.

I’ll let you know what I notice from this beta and feel free to add in your two cents in the comments.

[Update] Well, some of you may have problems with it and so am I. I can’t get the OTA download to get past the “<1 minute remaining" mark. You can head over to BGR for a full change log though. 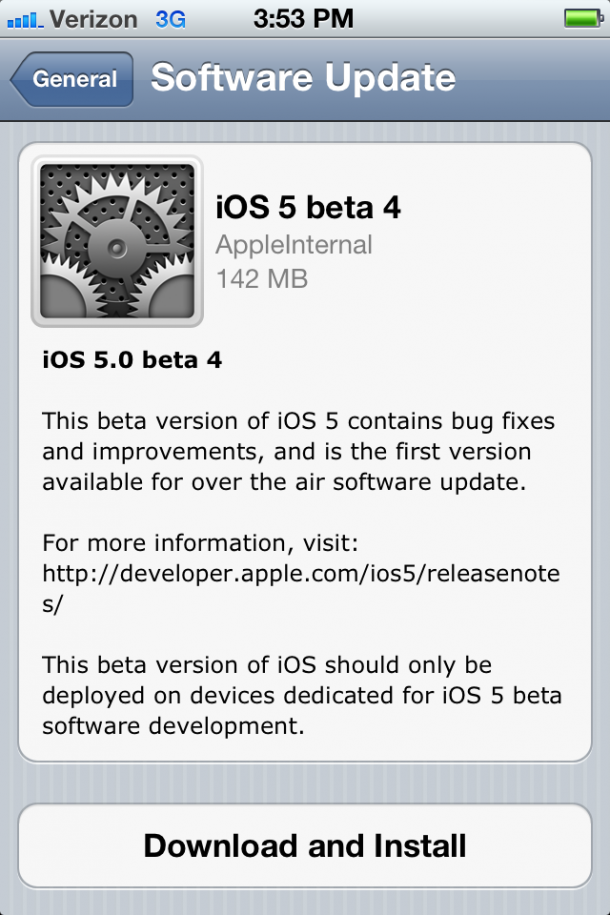 This patent thing is getting out of control. Lodsys, which has been going after app makers over in-app purchase patents,...