Every time a new Android phone comes out, odds are there’s a Qualcomm chip inside. Whenever we cover said new device, we say things like “the HTC Thunderbolt packs the Qualcomm MSM8655”, which means absolutely nothing to you until we run some benchmarks and compare it to what else is out on the market. Last week Qualcomm aimed to make their chips easier to identify by coming up with a new naming convention: S1, S2, S3, and S4. The Nexus One has an S1 chip inside, the HTC Thunderbolt has an S2 chip, the HTC EVO 3D has an S3, and S4 will be used for next generation products hitting the market towards the end of this year, though more likely the beginning of 2012. None of this matters of course because a device like the Google/HTC Nexus One, despite having an ancient processor, runs an unmodified version of Android and can thus feel faster to operatre than the latest dual core beasts on the market that have a user interfaced that’s been meticulously molested by handset vendors all in the name of differentiation. 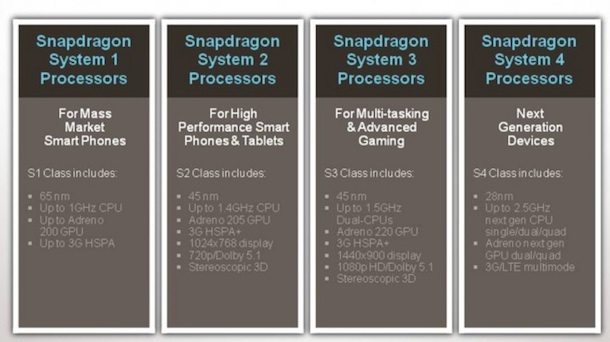 More importantly, why should you care about S1/S2/S3/S4 when no one else uses it? How does a 1 GHz S1 compare to an 800 MHz S2? The faster GPU in the S2 makes things feel silky smooth and because it also uses a 45 nanometer chipset, it also has better battery life. But of course in order for us to express those sentiments we need to go in depth and thus make the new naming convention absolutely pointless. When we cover products with chips from Texas Instruments, Samsung, NVIDIA, or ST-Ericsson inside, we need to talk about things that can’t be summed up by any marketing document; instead we have to take a holistic view of the mobile chipset space. 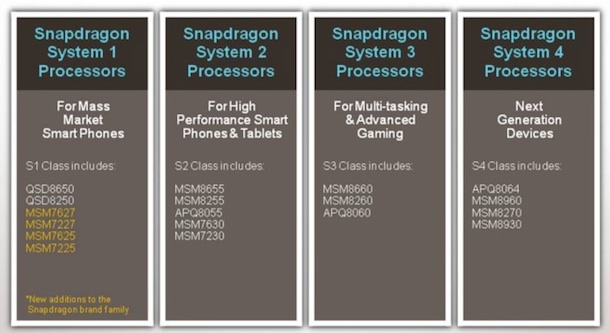 Will the new product names make things easier for you to discern what the best smartphone on the market is right now? Probably not. Will they make things easier for us when covering the latest devices? Again, highly unlikely. It’s not that we don’t love Qualcomm, they’re one of our favorite companies, but sometimes we just have to wonder what their marketing department is trying to do.

OmniVision, makers of camera sensors that can be found in numerous smartphones, including Apple's iPhone, has just announced a new...