It’s 2011, and it’s a surprise that many merchants are still using big, clunky cash registers that look no different than they did 20 years ago. The Apple iPad, however, is slowly changing all of that. If you’ve been in any relatively decent-sized city over the past year, and walked into a major retailer, you might have noticed an iPad where a cash register would normally be. It’s a trend that should really catch on for space and convenience.

Even smaller retailers can benefit by using apps and services like Square to accept payments and handle credit card transactions. Many other vendors and retailers are using custom apps to handle their payments systems, and it looks like big-name companies are deploying the Apple tablet en masse.

Lowe’s announced last week that it was rolling out 42,000 handheld devices in the U.S. and Canada. That closely follows announcements by Home Depot, Nordstrom and Urban Outfitters.

While some of the retailers are a little shy about saying which devices are being deployed, for the most part they are using Apple products — an iPhone, an iPad or an iPod touch. And while the devices may eventually be used to accept payments, many of them are starting off as tools for salespeople to look up answers or to check on product availability. 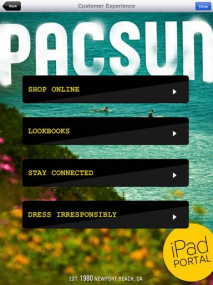 Well of course they’re using Apple products: when was the last time you or a friend saw a big-box retailer, or even a smaller merchant, accepting payments with a Droid or a Samsung Galaxy Tab? I thought so.

Of course, there are still a few obstacles to overcome–like cash. But these are minor details when it comes to the bigger picture – streamlining point of sale with a more compact cash register, the iPad.

Aside from cash registers, we’ve seen the iPad act as directories for clothing stores, menus and guides for restaurants and hotels and many other things. It’s going to be pretty tough for any other manufacturer or platform to get its foot in the door when Apple has virtually slammed it shut.