By this time next week, I’ll be in Anaheim schmoozing with Mickey Mouse and the good folks at Microsoft during its Build conference and we should get a much better idea of how the next version of Windows will look like and operate. We should also finally get to see Microsoft’s real answer to the iPad and see if the software giant can get back in the conversation when it comes to tablet computing.

Microsoft’s tablet strategy has always been Windows but previous computer slates it has shown off had Windows 7 on it and this didn’t fit the form factor because that operating system was never built with tablets in mind. That should change with Windows 8 (or whatever it’s official name will be), as the building Windows 8 blog constantly says that this version has been designed from the ground up with touch input in mind.

We’ve seen the Metro-style home screen before and it brings a tile-like interface to Windows 8 and elements of this can already be found in Windows Phone and on the Xbox. This is supposed to be a finger-friendly interface that will allow Windows 8 to work properly on a tablet, where touch interface is critical. But Microsoft has to please many masters with Windows, as hundreds of millions of users are familiar with the standard desktop interface and some (businesses mainly) will freak out with radical changes. 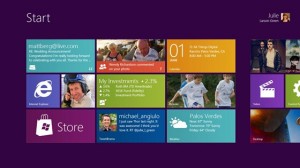 Microsoft’s Steven Sinofsky addresses this in a somewhat vague way in that blog post about design: Microsoft is taking the middle road where it can still leverage its millions of traditional users, apps and APIs while still designing something that can fit nicely and work elegantly on a tablet.

Windows 8 brings together all the power and flexibility you have in your PC today with the ability to immerse yourself in a Metro style experience. You don’t have to compromise! You carry one device that does everything you want and need. You can connect that device to peripherals you want to use. You can use devices designed to dock to large screen displays and other peripherals. You can use convertible devices that can be both immersive tablets and flexible laptops.

This sounds amazing, as having a tablet with a great multitouch interface with a ton of existing apps that can easily be docked to fit your needs sounds like an incredible experience. The vision is for a user to have an iPad-like device for watching films on a plane and then being able to plug in a keyboard dock when you land and have a fully-functioning computer. This could kill the notion that we’re in a post-PC world by removing the compromises we have to accept on an iPad or on an Android Honeycomb tablet.

Of course, it’s far more difficult to execute that vision and it’s unclear if Microsoft is capable of doing it or if that’s even the right approach.

When Steve Jobs first introduced the first iPhone, he made a big deal about how the OS was OSX. As time progressed and the iPhone and iPad became tremendous hits, that association has been downplayed if not completely ignored even if there are technologically similar underpinnings. Apple’s iOS is now the company’s main platform and many of its elements went upstream with the introduction of Lion.

When Jobs talks about the Post-PC era and the iPad, he means that Apple is trying to strip out many of the frustrating elements of traditional computing to make it easy and elegant for the mainstream to use these devices to check the web, do e-mail and social networking and consume apps. The fact that the iPad has been more successful than any other tablet to date (including Microsoft’s tablet efforts for decades) show that it’s on to something.

Maybe tablet computing has to build off of a mobile OS to be successful. Yes, this includes many limitations which make power users frustrated but the focus on user experience, maximization of screen real estate and multitouch interface have proven to be extremely powerful for the tablet form factor. It may be easier to make a mobile platform smarter and stronger to fit on a tablet rather than trying to scale down and simplify a “real” OS.

Or maybe Microsoft can really split the difference with the next version of Windows and provide a great desktop experience that can be scaled down for a multitouch tablet version without having a negative impact on apps, battery life or user experience. It’s going to be a tough nut to crack but if you believe that these tablets are just another form of computing (as Microsoft does), then you have to believe that the overwhelming market leader in computing software will be bringing its best stuff.

Along with more in-depth looks at Windows 8, there’s a good chance Microsoft will be giving out a tablet with a beta of this new OS because developers need to test out this new interface on hardware before it gets released to the public. You can be sure I’ll be digging into that device and comparing it to my iPad.

What do you want to see from Microsoft at Build? What would a Windows 8 tablet have to have in order for you to buy it? Let us know in the comments, friends.

Sony has started accepting pre-orders for its Tablet S device listing September 16th as a shipping date. At the moment...