Some people call Angry Birds the Mario of our generation. Unlike Nintendo however, the folks at Rovio don’t have multiple franchises that they can reboot every few years to milk money from their rabid fan base. It’s odd because the Angry Birds game, which first launched in December 2009, hasn’t changed in the slightest bit. You’ve got birds that you hurl at pigs, and that’s it. Sure, there are different versions of the game based on international holidays, there’s a version that was created to hype the animated film “Rio”, and new levels get created to mix things up a bit, but it’s fundamentally the exact same title that’s soon going to turn 2 years old. Now there’s nothing wrong with age since many folks enjoy taking their Nintendo or Super Nintendo out of the closet every once in a while and reliving their childhood, but does Rovio deserve the hype they’re getting from their one hit wonder? Will they ever come up with something new? 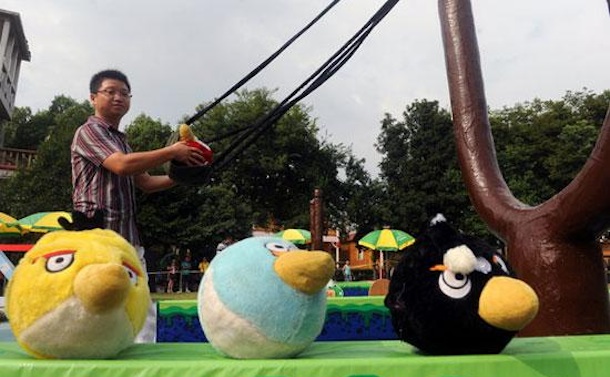 For now Rovio frankly doesn’t need to innovate because they’re squeezing every penny they can out of the Angry Birds brand. Rovio’s North American General Manager Andrew Stalbow recently told a crowd at the 2011 TechCrunch Disrupt conference that the Finnish company is selling 1 million t-shirts and 1 million plush toys each and every month. There’s also an Angry Birds cook book that’ll soon be available. Several Angry Birds fanatics in China, without the permission of Rovio, launched a theme park based on the game. Daisy Yang, a spokeswoman for Rovio China, said: “We would welcome a partnership, but Rovio would need to give them permission to use the Angry Birds game.” That hasn’t stopped the park from operating. “This [Angry Birds park] serves as a method for people to purge themselves and to gain happiness,” said a park official.

Now excuse us while we go “purge” ourselves from the blatant consumerism Rovio takes part in while failing to actually create something new.

Formspring has released its official iPhone and iPod touch app into the App Atore. We knew it was coming eventually,...