As expected, Microsoft used Build 2011 to show off its upcoming Windows 8 platform and the operating system is described as a re-imagining of Windows for devices that can be 7 inches or 70 inches. Can Windows 8 make the iPad and Android Honeycomb shake in its boots or is Microsoft’s one-platform-for-all-form-factors strategy destined to fail?

Windows 8 takes many design cues from Windows Phone 7, as users will immediately recognize the live tiles that greet you at the start screen as well as the lock screen which displays ambient information like missed instant messages or upcoming calendar appointments. These apps are all designed in a “Metro-style” which means clicking on them will take up the whole screen and they follow a certain design aesthetic – think of how the Facebook Windows Phone app has its own look but still fits inside of the Windows Phone motif.

There are a lot of similarities between Windows Phone and Windows 8, as the virtual keyboard looks and sounds the same, the loading animation with apps is the same, the calendar, Mail and SkyDrive integration will be instantly familiar with those who have used the smartphone. But the major differences between Windows Phone and Windows 8 are size and power.

Microsoft said that the larger form factor of tablets and computers make for a fundamentally different design experience for apps and interacting with the system. While Windows 8 will work just fine with a mouse, keyboard and keyboard shortcuts, it’s clear that this thing was meant to be touched. The fluid nature and overall visual pleasure from flicking through panes of live tiles should make this a solid tablet platform. 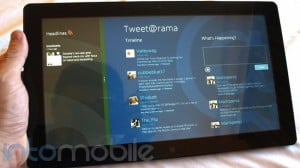 This interface also means that there are new system-wide gestures which will have to be learned (although you can access these with right clicks on the mouse and such). Swiping from the top or bottom within an app will bring up a contextual menu for settings, swiping from the right brings up “Charms” which allow for quick access to system settings (controls, search, etc.) and swiping from the left will let you switch between full-screen apps. The gesture controls are not as fluid right now as something like the BlackBerry PlayBook but this is still an early build of Windows 8, so it should improve with time.

That power also means that you’ll be able to do real multitasking. Yes, Windows 8 will support nearly every legacy Windows 7 app and if you’re in the Desktop app, you’ll have a traditional Windows 7 experience with folders, ribbons and more. But within the Metro-style UI (they keep calling it “Metro style”), dragging an app from the left about halfway into your running app will “snap” it into place on the side. You can then run these two apps at the same time and adjust the size accordingly. Think about having an IM client constantly running while you’re browsing or having a calculator open while you’re doing homework.

The thing about the Metro-style UI on Windows 8 is that it’s not just a skin, as Microsoft is very clear that this experience and multitouch capabilities are a vital part of what the platform aims to deliver. It will have clever things like a power-saving mode on ultra-portable devices (tablets, netbooks) which will let it maintain good battery life but still giving the apps enough leeway to update once in a while.

The user interface and strong touch capabilities are obviously the things that jump out at you with Windows 8 but there are a ton of other improvements including increased security, an upcoming Windows Store which will deliver certified Metro-style apps a la the Apple Mac Store, a neat warning which will pause your scheduled downloads or warn you if you’re on a metered data connection and a lot more. 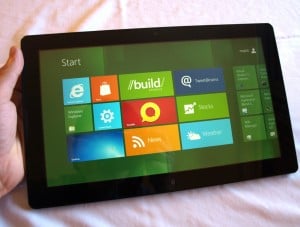 Seeing and playing with Windows 8 for a while is actually quite a joy. It’s fluid, looks highly modern, the touchscreen interaction is spot on and this will have all the power you’re used to with Windows 7. Of course, Microsoft is trying to be everything to everyone with Windows 8 and that type of strategy rarely pleases anyone. Already, I can see jarring UI issues when jumping between legacy or traditional apps and the sleek-looking Metro-style apps. Heck, power users may even think the Metro-style UI is just unnecessary window dressing.

Because it has hundreds of millions of legacy users, Microsoft couldn’t and wouldn’t just break from previous Windows versions and leave users in the cold. It’s not good for the users and it’s not good business (also, they’re not Apple). Still, the advancements in Windows 8 with user interface, touchscreen controls and app ecosystem really could help Microsoft flex its muscles in the burgeoning tablet space.

We still don’t have a solid release date, there may be issues with what apps ARM vs. X86 can run, hardware makers have to provide a great product with good battery life and Apple’s iPad 3 and the next generation of Honeycomb tablets could leave Microsoft in the dust by the time this lands in 2012. Still, I really want to use a Windows 8 tablet for a long, long time and it’s actually cool and fresh.

Here’s a quick demo of the interface and some apps, we’ll have a lot more for you once the keynote’s over.

We're live in Anaheim for Microsoft's BUILD 2011 conference and we're about to hear what the company has to say...