While it’s hardly as interesting as Timeline, Mr. Zuckerberg announced at F8 the introduction of verbs when it comes to updating your status. The new feature sure doesn’t sound all that much but it may be perking up the ears of the creators of apps like Miso and GetGlue.

GetGlue and Miso are popular applications that allow you to share what movies or TV you’re watching or music you’re listening to. For the most part, these applications work great and there’s a nice community behind them. In all likelihood, these users probably use Facebook and the new ability to tell friends that they are watching TV, etc within Facebook may keep these users from going into apps GetGlue. 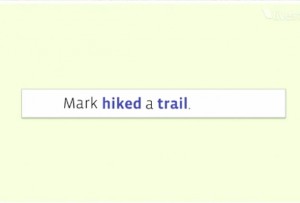 With the vast amount of users it has, Facebook has the potential to put TV/Movie etc “check-in” apps to sleep, and easily at that. While I’m certainly not in the majority, I very rarely use Facebook and would likely remain using Miso if I would want to tell the world what I’m watching but people spend a lot of time on Facebook as it is and it’s bringing features that these apps have been doing for a while now. Having virtually all of the functionality of GetGlue available in Facebook will prove to be quite a challenge for these developers.

When you’re Facebook, you only have room to grow, even with real competitors coming up. The likes of Miso and other apps of its kind fill a niche market, which has given them the success they are today but Facebook’s new feature, as simple as it may be for the social-networking site, could have some devastating effects.

If you use both Facebook and GetGlue, Miso, etc, will the introduction of verbs in status updates make you stay within Facebook, or will you continue to use both services?