Earlier this week Opera Software hosted an event dubbed “Up North Web” that roughly 80 journalists attended. I’m happy to report that I was one of them. During my 70 minute flight back home today, from Oslo to Helsinki, I went through my notes in an attempt to figure out what the overarching theme of the conference was, and I’ll admit that it was a bit of a struggle, but in the end I just couldn’t let go of the concept that Opera is a company currently in transition. They’re known for their desktop and mobile browsers, but they’ve also got so much more going on that calling them a mere browser vendor seems like such an incredible diservice.

Over 200 million people use Opera’s software every month, which is an incredible number considering that they only have about 750 employees. According to the International Telecommunications Union, as of last year there are now over 2 billion people using the internet, which means Opera has a 10% market share. That’s not a figure you’ll read in data published by companies like StatCounter, who say Opera’s market share as of last month is around 1.72%, but not every website uses StatCounter for analytics. Opera on the other hand has multiple server farms that drive the compression technology that users in many emerging countries depend on for internet connectivity. Opera can count how many unique devices are using those servers, which is where that 200 million figure comes from.

This past August the web turned 20 years old, meaning it’s no longer a teenager. We can say it’s changed quite a bit since the text only days of Mosaic, but the overall concept of a browser on your screen that you interact with using a mouse and keyboard hasn’t actually evolved all that much. Devices like smartphones and tablets are increasingly becoming the primary way people interact with the web, especially in markets where a mobile phone will be the device that introduces someone to the internet for the first time, so Opera thought to themselves why not optimize the web for these touch centric direct manipulation interaction models? Enter Håkon Wium Lie (pictured below), Opera’s Chief Technology Officer and the father of CSS (cascading style sheets), who showed his W3C proposal titled “Generated Content for Paged Media Module” to the world for the first time at Up North Web. 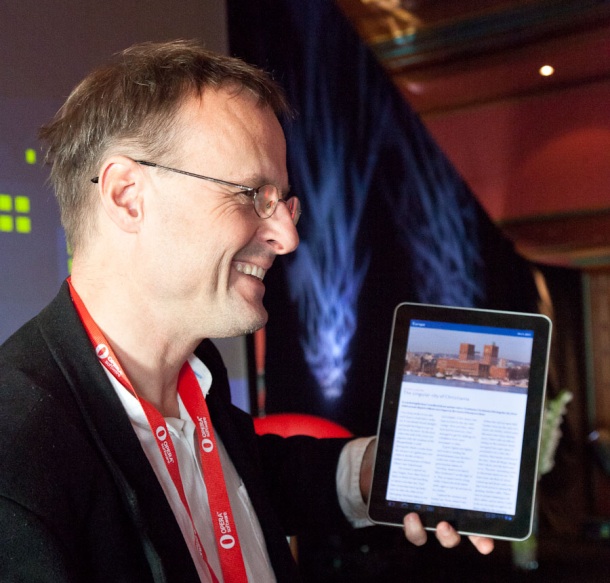 Using some very simple CSS, content companies can now create websites that format themselves much like a newspaper, allowing you to flip through pages in a more natural way. One of the demos was a Wikipedia article. No longer do you have to scroll from top to bottom, you can now scroll from left to right, and the text will present itself in the best possible way. It’ll be up to browser vendors to implement Håkon’s idea, and considering how big mobile computing is expected to become over the next few years, I doubt it’ll take very long for the folks at Apple, Google, Microsoft, and Mozilla to support the “Pages” feature.

Shifting gears a bit, what about the web on your television? Visit your local electronics store and ask how many of the television models they’ve got on display offer some sort of internet connectivity. It’s around 20%. That figure is only going to go up and according to Lars Boilesen, Opera’s CEO, who says that TV is going to be the next big platform that Opera will be focusing on. Currently Opera has deals with 4 out of the 7 major television makers (read: Sony, Philips, Toshiba, and Sharp) and over 20 companies who produce set top boxes. TV is a field Opera’s been playing in for 8 to 9 years now according to Frode Hernes (pictured below), Vice President of TV and Connected Devices at Opera. In 2009 Philips became the first company to ship televisions with Opera preinstalled. Sony became the second company just a year later. Frode says there are already roughly 15 million people using an Opera browser on their television every month. His hopes are that in 5 years time the television division of Opera will make up a third of the company. 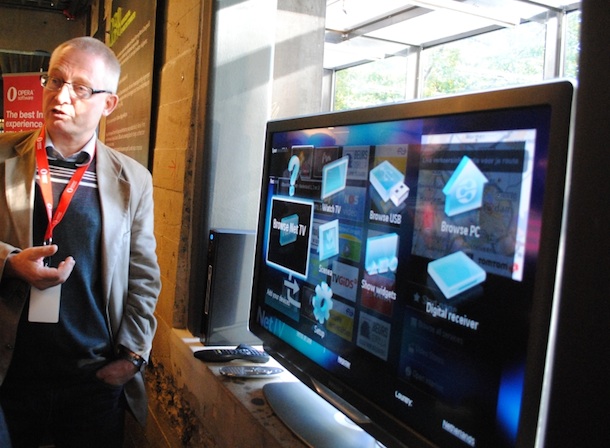 As for people who already own a television and don’t want to buy a new one just to be able to poke their Facebook friends on the largest monitor in their house, Opera also showed off a set top box reference design built by Broadcom that uses web technologies to deliver the entire user experience. Think of it as webOS, but for TVs. The UI is made in HTML, the widgets are made using JavaScript, and videos can be embedded using the HTML5 video tag. It wasn’t revealed if any partners signed up to bring this device out to the market, nor how much said box would retail for, but at least it made for an interesting technology demo. Opera’s going to be facing some serious competition though from Apple with AppleTV and Google with GoogleTV, not to mention Motorola’s set top box division, which will soon be under Google’s control.

Going back to the basics, what’s Opera working on in the browser department? Opera 12 was shown off at the event for the first time, ever. It’ll be available to the public tomorrow. Key features include hardware accelerated graphics, so your device’s graphics processor will be able to help deliver a smoother web experience; support for Device API, enabling websites to interact with the hardware in your computer such as the webcam in your laptop; WebGL support, which finally gives game developers a chance to write some incredibly advanced titles that’ll run in a browser; and there’s also some UI tweaks that make Opera 12 look a bit too much like Chrome in my opinion. The most obvious form of “inspiration” from Google’s browser is the star that resides in the address bar. It allows you to bookmark a site or pin it to what Opera calls your “Speed Dial”. It’s a grid of icons that represent your most visited websites. Google automatically generates such a grid based on which sites you visit most frequently, whereas Opera allows you to set your preferred sites manually. Oh and there’s also more advanced themes support, for those of you who want to make your browser unique.

On the mobile side there’s Opera Mobile 11.5 for Android and Opera Mini 6.5, which I believe is Android only for now. The key differences between the two browsers are that Opera Mini does more of the “heavy lifting” on a server farm in the cloud; things like parsing HTML and running JavaScript. Opera Mobile on the other hand is more like the browser you install on your personal computer because you don’t like the browser that came with your machine. You can however enable Opera Turbo on Opera Mobile so you can take advantage of the compression capabilities that Opera Mini users enjoy. One thing Opera’s Chief Technology Officer, Christen Krogh, was keen on pointing out on numerous occasions was how Opera Mobile 11.5 didn’t show users the same checkboard effect that Apple’s Safari browser does on iOS devices while rendering complex websites. I didn’t have the chance to run any benchmarks on Opera Mobile 11.5, mainly because I don’t own an Android tablet, nor any tablet for that matter, but I’m sure the numbers will back Christen’s claims of improved performance. 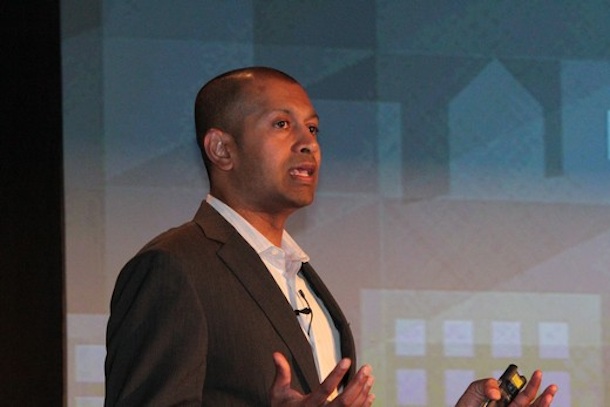 Now here’s where thing get complicated. Opera purchased a company called AdMarvel back in January 2010. That very same month Jon von Tetzchner, Opera’s co-founder, relinquished his title as CEO. An employee who wishes to remain anonymous told me that the news came as an incredible shock to everyone at the company, and when people started asking around as to why Jon stepped down, and then eventually left Opera 18 months later, they were told that they couldn’t be given the exact answer because it would have a direct impact on the company’s stock price. Said employee went so far as to advise me to cease mentioning Jon’s name at the event. I wouldn’t have even brought this up if it weren’t for the significant amount of stage time that Mahi de Silva (pictured above), who came from AdMarvel, was given at the conference.

AdMarvel’s platform, now an Opera property, touches over 110 million internet users a month; over 26% of them use Opera. They deliver an astonishing 21+ billion ad impressions every single month, 33% to iOS users, 24% to Android users, 9% to RIM users, and the remaining 33% is simply “other”. Over 7,000 companies use AdMarvel, some you may have heard of: The Wall Street Journal, The Evening Standard, Major League Baseball, and Shazam. At the conference Mahi announced the “Opera Payment Exchange”, which will allow content owners to augment the revenue they’re receiving from advertising by charging users directly using a large variety of payment formats, all of which will be handled by Opera. Enabling said feature will be as easy to implement as injecting some JavaScript on a website.

How much of Opera’s future revenues and business decisions will be driven by this new company that’s recently been acquired is tough to say. Opera sits on a massive amount of data thanks to everyone who uses Opera Mini and Opera Turbo. I’ve often suggested that they can use this to sell extremely targeted advertising. Mahi put it best when he said: “Advertising is all about audience intelligence.” After his talk I stopped thinking of Opera as a browser company. They’re more like Google now, by that I mean they both have a goal of bringing the web to as many people as possible, and to make current web users use the web in even more places, so that more ads can be delivered and thus increase revenue. Opera’s got AdMarvel’s advertising platform, Google’s got AdSense. From a financial perspective, this is the absolute best way to position yourself, but Opera, to me at least, has always stood for being a company that’s wanted to make the web the best platform it can be so that no one company can control the internet and deviate from the principles that it was founded on. Now they’re just another company peddling ads, they also just happen do web browsers.

During a question and answer session I asked why Opera remains a closed source product? If the company’s goal is to advance the state of the web, then why not let everyone contribute to making a better browser? Working with standards bodies is one thing, and I’m not saying Opera should stop doing that, but they could be doing so much more to move things forward if they gave everyone access to their browsing engine. Similar to how Google is enabling smartphones to become commodity items, Opera can commoditize awesome browsing technology. Their strengths are now the server farms they run, the new advertising unit, and their extreme focus on putting the web on everything with a screen and a connection to the internet.

The history books may remember Opera as being the first to come up with tabbed browsing, speed dials, and gestures, but what’s in their future? This conference was supposed to answer that, but I must’ve missed the message because all I see is a company that’s half way through a major transition.

Disclosure: Opera paid for my flights, transportation to and from the airport, my hotel, my meals, everything. The only thing I actually paid for during this entire trip was a bottle of sparkling water. I also interviewed with Opera in the summer of 2009 in Oslo for a position on the Opera Mini team, so you might say I’m an Opera fanboi.

When it comes to mobile gaming, I tend to play strictly on my iOS & Android devices mainly because I'm...