Android once again proved its continuing dominance in the U.S. mobile market with 45 percent of all smartphones nationwide according to Internet marketing research company comScore. Android closed out September with 44.8 percent market share, up 4.6 percentage points since June 2011. The only company to show any improvement during that same period in time was Apple’s iOS, which garnered 0.8 percentage points over June gaining 27.4 percent of the U.S. smartphone pie.

These numbers shouldn’t surprise anyone, especially since Nielsen’s research study basically mirrored the same results. I think the more glaring result is how the gains in both Android and iOS were offset by drops in the market share of RIM, Windows Mobile and Symbian. RIM just continues to flounder, with a 4.6-point decline, hovering just underneath 18.9 percent. The maker of BlackBerry in a month dropped almost a percentage (0.8 percentage). Lastly, Microsoft fell 0.2 points to 5.6 percent and Symbian now commands 1.8 percent, down 0.2 percent since June. It’s no secret that Android is dominating the way it has quarter after quarter because of its wide array of devices offered. Google’s OS is saturating the market with mid- to high-end handsets and this is hard to compete against, even if you’re Apple.

Besides market share, the comScore survey also provided some details on mobile content usage. Text messaging was the most common activity, claiming 71.1% of respondents, while browser usage sat at 42.9%, app downloading at 42.5%, social networking at 31.5%, game-playing 28.8%, and music listening at 20.9%.

How do you feel about Android’s gradual domination of the smartphone world? Do you welcome our new robot overlords? 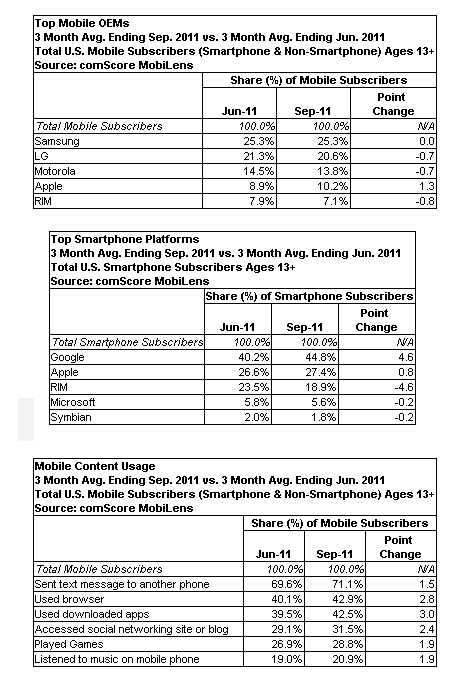 Barnes & Noble introduced an update to its Android-powered Nook Color and the Nook Tablet promises to deliver everything its...