The time many of you have been waiting for has finally arrived. Not only have we just got our first real look at NVIDIA’s quad-core processor, the Tegra 3, but now we have more information on the very first tablet that will be using the snappy SoC, the Asus Eee Pad Transformer Prime.

The Transformer Prime is a significant upgrade from the still-popular original. However, the Prime in its name is there for a reason. The tablet is being marketed as a premium tablet, and of course, it is. Because of that, the pricing for the Transformer Prime isn’t the same as the original, which was aimed at the mainstream consumer. That said, if you’re looking to be the cock of the walk with your next tablet purchase, or even your first, the Transformer Prime is where it’s at. Starting at $499, the pricing itself isn’t out of the standard pricing of a high-end tablet these days, but what does the Prime bring to the table you won’t find anywhere else? Let’s take a look.

If you’ve seen the original Transformer, you’re definitely in for a surprise when you see the follow-up. The stupid-thin tablet is stunning to say the least and Asus has done a phenomenal job of executing a very simple design and making it beautiful.

We already know what powers the Transformer Prime but that’s certainly not all there is to the tablet. Shipping in Amethyst Gray (a mix of purple and gray) and Champagne Gold (mix of silver and gold), the Transformer prime screams quality without even laying a hand on the thing. Coming in at a mere 8.3mm thin, the Transformer Prime will ship as the thinnest tablet on the market today, all while being the most powerful to boot.

Boasting a 10.1 inch LED display with Super IPS+ (1280×800), the screen should be much easier to see outdoors than the competition. The display is also covered in Gorilla Glass, as well as a hydro-oleophobic coating for fewer smudges and easier cleaning. This anti-fingerprint coating is also found on the rear side of the tablet, which has a very nice brushed-metal finish.

Sporting a 1.2 megapixel front-facing camera and an 8 megapixel shooter with a F2.4 aperture and LED flash, the Prime has one of the best cameras found on a tablet today. Of course, with a camera of this kind, you’ll be able to capture 1080p HD video on the Prime with ease. While we’re still not sure just how often people use their tablets for taking photos, it’s hard to complain about such a decent camera shipping on a tablet today.

One of the best things about the Transformer is that you can grab the keyboard dock for more flexibility and the Prime’s keyboard dock has also undergone a nice upgrade. The new dock compliments the ultra thin tablet and both collectively weigh under three pounds when together. The new dock features the expected 40 pin connector, USB 2.0 port, SD card slot, multi-touch touchpad, and 22Wh battery. Even with the superior 12 hour battery life on the Prime, adding the dock is said to bring that battery life up to 18 hours.

The base model of the Transformer Prime starts at 32GB, which will run you $499 and a 64GB version will run $599. To complete the package, the keyboard dock will cost $150. Given that the tablet itself sports a microSD card slot and the dock has a full SD card slot, you may be able to get away with the 32GB version and run.

For even more details about this sexy beast of a tablet be sure to read the press release below. 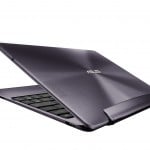 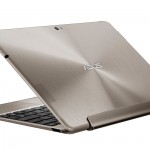 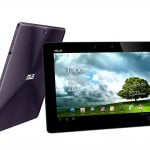 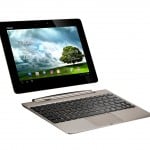 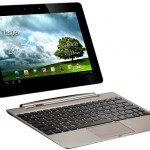 Fremont, CA (November 8, 2011) — ASUS officially announces the world’s first tablet with the NVIDIA® Tegra® 3 quad-core processor – the ASUS Eee Pad Transformer Prime. The Eee Pad Transformer Prime is ultra-thin at 8.3mm (0.33”) and lightweight at 586g (1.29lbs) while featuring a stylish metallic swirl design with class leading enhancements including ASUS SonicMaster audio technology, an HD 8MP rear auto-focus camera with LED flash and battery life rated for up to 18 hours* when combined with the optional mobile dock. Pricing will range from $499** (32GB) to $599** (64GB), with the optional mobile dock accessory priced at $149**.

Incredibly Slim yet Incredibly Powerful
Featuring an ultra-slim form factor, the Transformer Prime is only 8.3mm (0.33”) thin and weighs in at a mere 586g (1.29lbs without dock).  This makes watching movies, surfing the web, playing games, taking photos, finishing up homework or video chatting with friends or family so easy and natural that you’ll wonder if the Transformer Prime was designed specifically with you in mind.  Its innovative metallic swirl design is made of aluminum for a secure yet extremely comfortable grip that comes in two gorgeous colors: Amethyst Gray and Champagne Gold.

Fantastic Battery Life
While the Transformer Prime is extremely slim and light, ASUS did not forget about battery life.  Thanks to the advanced power management features of the Tegra® 3 processor and ASUS optimizations the Transformer Prime has a battery life of up to 12 hours*, but when combined with the mobile dock, it lasts up to an incredible 18 hours*, the longest battery life of any current tablet.  That’s enough battery life for a trans-ocean flight, all-night game session, viewing several movies on a long road trip or even video recording, editing, and then playing back your child’s school play all in 1080P HD clarity.

Unrivaled Visuals
The Eee Pad Transformer Prime boasts a wide 178° viewing angle IPS display, protected by Corning® Gorilla® Glass, which features new ASUS technology to enhance the brightness of the screen for a better outdoor reading experience while still offering a remarkably vivid and brilliant viewing experience of photos, books, videos, movies and web pages indoors. Thanks to Multi-Touch technology, you can use your fingers to do everything from swiping through photos, surfing the web, playing the latest games, typing emails, instant messaging, reading books or magazines, and starting your favorite movie.

A 1.2MP front camera allows for instant photos or high-quality video conferencing with friends, family or coworkers while an 8MP rear camera with auto-focus and LED flash takes brilliant photos or video thanks to a large F2.4 aperture, back illuminated CMOS sensor, touch-to-focus depth of field and low-light noise reduction to provide the clearest and sharpest photos or even 1080P HD videos.

Unlimited Productivity
The Transformer Prime is offered with either 32GB or 64B flash storage options for quick, efficient and reliable access to your applications.  Both models feature a micro SD card slot, 3.5mm combo audio jack and micro HDMI port so sharing both what’s inside and on-screen is quick and easy. However, the function that gives the Transformer Prime its namesake is the mobile dock, which gives new meaning to the term versatility. This innovative and convenient design seamlessly provides the user with a keyboard and touchpad, along with limitless expandability options via the USB port and SD card slot.

ASUS will include several innovative applications like SuperNote that is fantastic for its ability to take, draw or record notes and Polaris® Office which is great for staying productive with the ability to read, edit or create Word, Excel and PowerPoint (MS Office 97-2007) compatible files.  Thousands of top rated applications and games are also available at Android Market that fully takes advantage of the Transformer Prime’s amazing features and power.
###

*Battery life will vary based on usage patterns and options.
**Pricing will vary by country and SKU. North American MSRP pricing listed.

###
About ASUS
ASUS, the world’s top 3 consumer notebook vendor and the maker of the world’s best-selling and most award winning motherboards, is a leading enterprise in the new digital era. ASUS designs and manufactures products that perfectly meet the needs of today’s digital home, office and person, with a broad portfolio that includes motherboards, graphics cards, optical drives, displays, desktops, Eee Box and all-in-one PCs, notebooks, netbooks, tablet devices, servers, multimedia and wireless solutions, networking devices, and mobile phones. Driven by innovation and committed to quality, ASUS won 3,398 awards in 2010, and is widely credited with revolutionizing the PC industry with the Eee PC™. With a global staff of more than 10,000 and a world-class R&D team of 3,000 engineers, the company’s revenue for 2010 was around US$10.1 billion.

It was back in late May that we got our first glimpse at NVIDIA's quad-core processor, codenamed Kal-El. The processor...