When Microsoft launched OneNote for the Apple iPhone back in January of this year, we had to slap ourselves into believing what was happening before our very eyes. Was Microsoft seriously going to start porting their cash cow, Microsoft Office, to Apple’s new mobile device platform? Turns out the answer was no since here we are, less than 3 weeks until the end of the year, and the only thing Microsoft has done besides bring OneNote to the iPhone is to now bring OneNote to the iPad. It’s just as glorious as you’d expect to be on the iPad’s large 9.7 inch screen, but there’s a huge catch. You’re only allowed to create 500 notes for free before needing to cough up $15. The iPhone version now has the same limitation as well, except once you hit the 500 note limit it’s just $5 to keep on note taking. Don’t try to be slick and delete old notes either, OneNote keeps a tally of how many notes you’ve created. Now some might point to Evernote and say it’s a superior solution, to which we have to say Evernote was created as an attempt to clone OneNote. That statement might annoy some of the Evernote loyalists, but it’s true. OneNote came as a part of Office 2003, whereas Evernote 1.0 shipped in 2005. 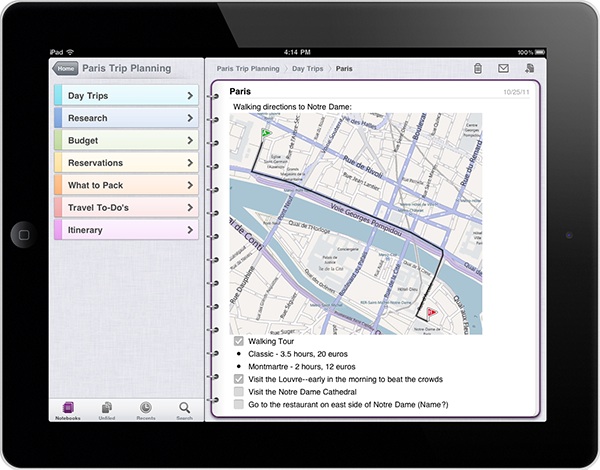 Anyway, the bigger question here is when, if ever, will Microsoft bring the other pieces of Office to the iPad and iPhone? Imagine the mass hysteria that would ensue if Word, Excel, and PowerPoint became available for the iPad? Microsoft doesn’t even need to port all the features that power users use, they just need to provide the basics and most importantly support compatibility between all the platforms that Office runs on. How would they price it?

If anyone at Microsoft is listening, please do the right thing and bring Office to iOS.

[Direct Link: Grab OneNote for the iPad via iTunes]

iRobot Roomba, the world-famous vacuum cleaning robot, is going for the iPhone users with a brand new game - Roomba...