Next month thousands of people will convene in Las Vegas, Nevada to attend the 2012 Consumer Electronics Show. If you’ve never been to CES, it’s worth checking out. If you’re a member of the press however, CES is about as terrifying as being diagnosed with testicular cancer. It’s three days of pushing, shoving, running to meetings, networking, drinking, and eating stuff that’s called food, but really it’s just a cocktail of cheap highly processed chemicals. After my fourth or fifth CES I made a promise to myself to never, ever, go there again. It’s honestly that bad. Anyway, why is CES so freaking important in the first place? It’s where nearly every company on the face of the planet announces the stuff that they’ll be selling over the course of the next twelve months. New smartphones, new televisions, new blenders, you name it, it’ll be at CES. 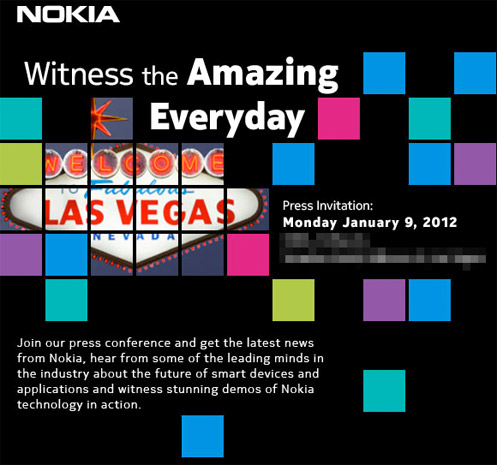 Nokia just sent out their CES press invitation, and by the looks of it it’s all about Windows Phone. Right off the bat the tiles give it away, and if that wasn’t enough to convince you, then the phrase “Witness the Amazing Everyday” seals the deal. It’s the same phrase that Nokia is using to promote the Lumia 800 in Europe. That being said, will Nokia actually bring the Lumia 800 to America? I don’t think so. Nokia has been absent in the American market for years, so they want to come in with a bang. Expect something like the Lumia 900 to launch, which will have a larger 4.3 inch screen, 4G LTE connectivity, and who knows what else.

As for which operator will get the Lumia 900, yesterday we posted a video where Paul Thurrott, Editor of the SuperSite for Windows, confessed that he has an internal document saying that AT&T will be Nokia’s partner at CES. So if you’re a Verizon customer … sorry.

Video: Nokia Lumia 800 gets beat up on the streets of Singapore, comes out unscathed

Say what you will about how Nokia's handled their smartphone strategy over the past few years, there's one thing that...