Everywhere I go in San Francisco, I’m bombarded by ads for eBay’s mobile initiatives and it even opened up a pop-up store over the holidays where users could scan and buy products that were then shipped to their houses. The company is really pushing into the mobile space in a big way but this is just the beginning of what could be the future of eBay’s business. In an interview with IntoMobile at CES 2012, eBay’s VP of mobile, Steve Yankovich (pictured above), spoke about how mobile could be transformative for its business, how it views the competition, what it has learned so far in this space and what to expect in the future.

“We don’t debate whether to do HTML5 or a native app … you have to do it all,” Yankovich said.

The company is approaching mobile as a vital part of its future, Yankovich said, and that means delivering a good eBay experience no matter what device the user has – that includes adjusting for various screen sizes, platforms and even making sure the WAP version runs well. Along with the standard eBay app, it also has five apps targeted at specific vertical like cars and it has seen more than 65 million downloads across its portfolio of apps.

There are more than eight billion reasons for eBay to be investing and utilizing mobile, as its CEO recently projected that gross merchandise sale for 2012 will surpass $8 billion. When you also consider that the eBay-owned PayPal is expected to top $7 billion in payment for 2012, the company has no doubts about how important this will be for it moving forward.

It helps to have the full support of the board and CEO’s support, Yankovich said, as he has the ability to buy companies like Redlaser and he always has the ability to purchase other companies which assist in the mobile shopping process. eBay is going full-throttle and it won’t be “nickel and diming” it’s approach. 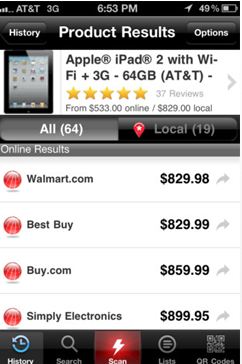 Yankovich said the only real competition in the space will be Amazon, as he expects eBay will partner in some fashion with the other companies. I’m a big fan of Amazon, its many apps and its broad mobile ambitions – which may eventually include a phone – and believe it will be quite a fierce competitor for eBay. Yankovich said it can one-up competitors like Amazon because of its massive inventory. Not only can it provide you multiple, brand-new Buy It Now goods, it still has the auctions for those collectables that you’ll probably never find on Amazon.

Additionally, Yankovich said eBay isn’t trying to kill traditional brick-and-mortar stores but instead wants to partner with them on things like licensing out the RedLaser technology or making it easier for a consumer to utilize apps to get more information on in-store products. He believes that retailers could partner with eBay in multiple ways without worrying about customers just using retail stores for hands-on time before buying it online.

That doesn’t seem to be the case with Amazon, as it recently had a promotion which gave buyers additional discounts if they used the barcode-scanning feature. Retailers were pissed. Thanks to its Milo database of local goods and its willingness to partner with major retail chains like Best Buy and Toys R Us, eBay is well-positioned to enable brick and mortar stores to utilize mobile technology for a better shopping experience.

“We’re not saying, ‘Scan it and just buy it online,’ we’re saying [to retailers], ‘Hey, let’s work together,'” Yankovich said.

Beyond the substantial revenues the mobile space will generate, there is an immediate gratification with the apps that can be tough to match on any other device – the second you think about buying something, no matter where you are, you can buy it with an eBay app with just a few clicks. It’s not just about capitalizing on existing customers, as Yankovich said the apps are bringing in many people who have never used the service before or participated in an auction.

“For some of our apps, they’re using it for the first time and we’re adding new eBay-ers because of mobile,” Yankovich said.

You would expect most of the engagement with the apps to be about buying or selling on the go but Yankovich said eBay has found that many of its app users like to just browse listings to kill time. This “snacking,” as Yankovich calls it, is definitely good for eBay but it also means that the company is not just competing against Amazon, it’s also competing against Angry Birds, Instagram and any other app out there for your time. 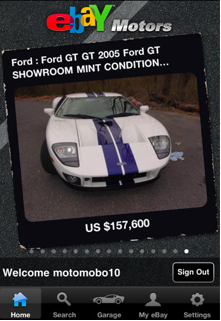 Yankovich is approaching this challenge (which actually isn’t that bad of a problem to have) in multiple ways. First of all, he said the team is focused on removing as much friction as possible within the apps so that if you want to buy or sell something, the experience is quick and painless. For those wanting a browsing experience, eBay is experimenting with making its apps richer with content. For example, the eBay Motors app can also deliver multiple videos about cars and automotive parts.

A big piece of eBay’s mobile story may eventually involve your television, as it recently launched its Watch with eBay feature in the iPad app and this will know what you are watching on television and then deliver relevant products you can buy on your tablet. A Nielsen study found that 86 percent of American smartphone and tablet owners use those devices while watching TV and if you’re like me, there have been many moments when you see something on TV that you would buy if you had an easy way.

Yankovich sees a ton of potential in this area, particularly for introducing customers to products they didn’t even know they wanted. He mentioned how during a Packers game he saw a Packers-emblazoned logo for a lawnmower. I’m sure that even die-hard Cheeseheads would probably never think to deck out their lawnmower in Packers colors but they probably would love that.

Moving forward, Yankovich believes that improved image recognition software could take the eBay apps to the next level. While it’s relatively easy for this software to identify products with fixed form factors (like a computer), Yankovich said it’s much more difficult for “soft” goods. You can rest assured that eBay is working on it, as it will “build or buy” this technology in order to try and remove as much friction as possible.

More than anything, I walked away from the meeting with the sense that eBay really gets it. Sometimes, it’s frustrating to see larger companies not be able to move swiftly to a mobile-first or at the very least, mobile-heavy world but eBay appears to be heading in the right direction. The competition is definitely going to heat up, so it will be fun to see what the future holds for eBay in the mobile space.

The Android development team listened to all the high-profile complaints about Android's less-than-stellar UI and responded with the Android Design...