We all know that tablets are blowing up in coffee shops and in planes but a new study from Cisco suggests that these devices will play an ever-increasing role with businesses.

The study surveyed the tablet opinions of 1,500 IT managers and executives in multiple countries about their opinions on tablets in the workplace and the results were pretty interesting. While it’s still at the early stages, I think it’s safe to say that tablets like the iPad are going to play a larger role in the workforce in 2012 and beyond.

Smartphones requests in businesses still outnumber tablets three-to-one and tablet requests are highest in the United States and France, the report found. Spain also seemed to be the most excited about tablets in the work place, as 90 percent of its IT managers said tablets will become popular in the next two years.

“Mobile workers and virtual workspaces are here to stay—but so are the demands on IT to continue to ensure enterprise-grade security, manageability and interoperability,” said Cisco’s Tom Puorro, director of product management, in a prepared statement. “2012 promises to be an exciting year and IT leaders are a critical component in unleashing innovation and enabling organizations to take advantage of the next wave of business growth and opportunity. Cisco is keenly focused on helping its customers navigate the post-PC era and transform their business.”

The report found that the “uber connected sales guy” is one of the major growth areas for tablets and this makes a lot of sense. Road warriors need e-mail, CRM software and access to presentation software but they generally may not need a full laptop. Additionally, it’s somewhat “cooler” for a sales guy to show off a presentation on an iPad than to show it on your standard, corporate-issue ThinkPad.

As with anything in the enterprise, security is a major concern with 75 percent of U.S. IT managers citing this as a fear around tablets. Still, 57 percent of those responding said that some employees were using personal tablet devices without consent and these users were probably accessing corporate data. Cisco does sell an enterprise-ready tablet with the Cius but it remains to be seen if this can overcome the iPad, which is rapidly gaining traction with businesses. 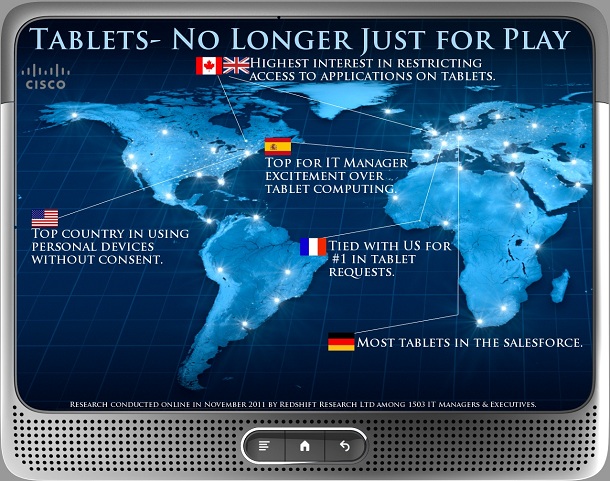