Returning from Asus’ conference, I can’t say I’m not impressed. Quite the contrary, the Taiwanese company managed to do it again, introducing new top-notch products.

During the presentation, Asus’ CEO Jonney Shih talked about “Transformation,” design thinking, cloud computing and where it sees its company fitting into the major trends. We’ve learned that Eee Pad Transformer brand will no longer be used — rather, Asus’ future tablet-convertibles will be called Transformer Pads. Not sure whether Hasbro’s lawsuit has anything to do with it, though. Then, Shih started introducing products… 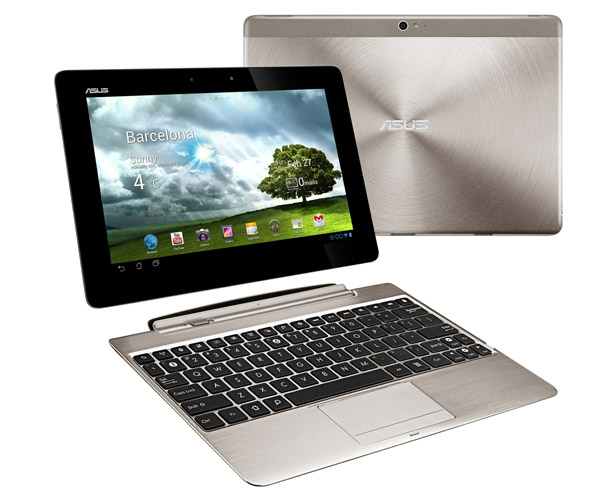 The rumors were true, it rocks a better 1920×1200 pixels full HD Super IPS+ screen with 600 nits brightness with Gorilla Glass 2. Its CPU can vary though, with certain models shipping with NVIDIA Tegra 3 quad-core CPU clocking at 1.6GHz, while some others rocking Qualcomm’s 1.5GHz Snapdragon S4 Krait dual-core processor. As for the rest of Pad Infinity’s specs, they are pretty much on par with the Transformer Prime and include things like 8-megapixel camera on the back, 1.3-megapixel front-facing one, Wi-Fi, optional 3G and 4G (LTE) connectivity, a ton of built-in storage, array of sensors and so on. 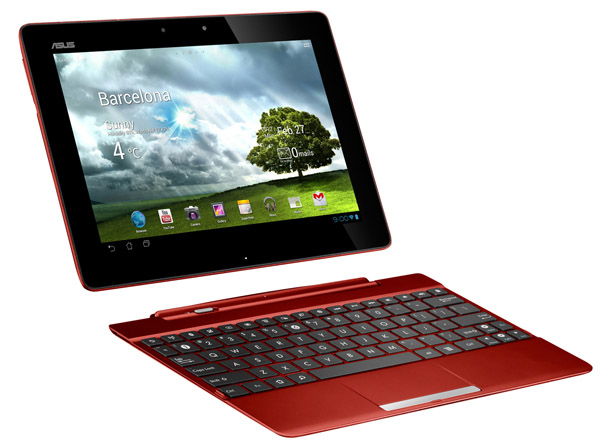 The second announcement was for the Transformer Pad 300 Series, which are dubbed as “stylish and affordable” tablets that will come in three different colors: blue, white and red. Specs wise, these will come with NVIDIA Tegra 3 quad-core CPU, 16GB of built-in storage, dual camera (8MP on the back, 1.3MP front-facing), Wi-Fi connectivity, sensors and so on. 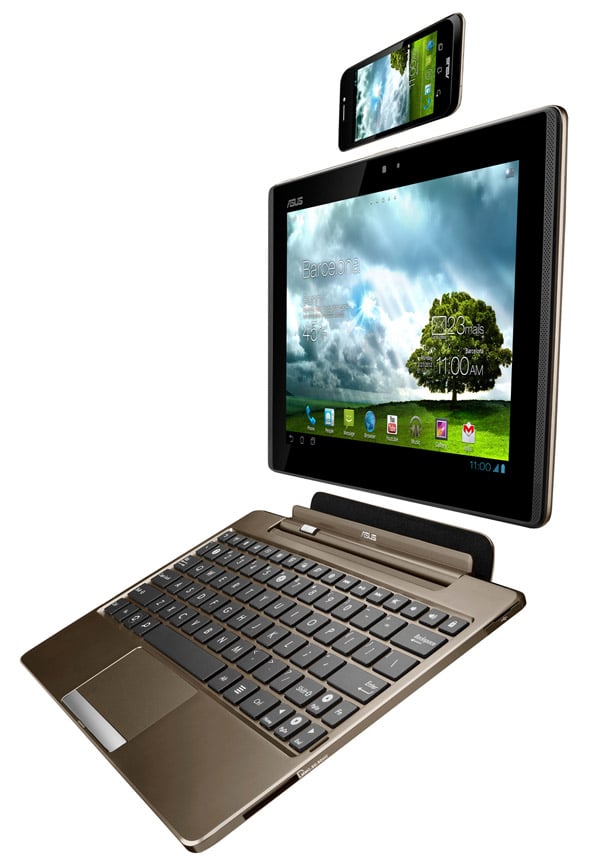 Then Jonney unveiled the Padfone, again. This time he shared all the details, full specs sheet included. Unfortunately Asus’ baby won’t ship with a quad-core CPU and will rather get its power from Qualcomm’s 1.5GHz dual-core Snapdragon S4 processor. Moreover, it doesn’t rock a 720p screen – it’s qHD, Super AMOLED, measuring 4.3 inches. When used as tablet, however, the screen grows to 1280X800 pixels automatically “growing your view” with DynamicDisplay technology. Rest of the specs include an 8-megapixel rear-facing camera, VGA front-facing one (1.3-megapixel when used as tablet), HSPA+ and Wi-Fi connectivity, GPS, Bluetooth, etc. The phone itself weighs 129 grams, while the Padfone Station has a weight of 724 grams and provides up to 5x battery life.

And… (drums please)… it has its own keyboard dock. This in turn allow you to use one SIM card for not two, but three devices (phone, tablet and netbook). The keyboard dock has its own battery, giving you even more juice (up to 9x battery life). This, according to Shih, is essential for energy demanding LTE connectivity.

Asus Padfone will be available in April, while the LTE version will be released in early Q3. 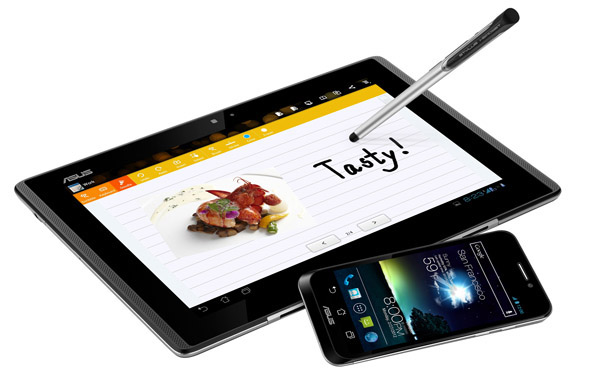 Jonney wanted us to think he’s done at one point, but then he answered a phone call with the Bluetooth-enabled Stylus Headset! Qualcomm’s CEO Paul E. Jacobs was on the other side of the line, and he used his few minutes to praise the partnership with Asus.

Back to the stylus. It looks solid and Asus says it’s made to allow users to “pick up calls easily” — i.e. when their Padfone is used in the tablet mode…

And that wraps this announcement article. Stay tuned for our hands-on posts.

Qualcomm is going to introduce a new Snapdragon platform this year called S4. We've already seen a handful of devices...