Although the next couple of paragraphs are about the device which is still in the prototype phase, we decided to give it some space on IntoMobile since it may easily be the best Android smartphone ever made.

As a product that is still not ready for the prime time, this Fujitsu phone still doesn’t have the name and I guess it will be up to the carriers to decide how it will call it. Unfortunately, we’re talking about a Japan-only device, but we do hope something similar will be released in the Western hemisphere soon.

So what’s so cool about this Fujitsu device? For one thing, it has all the bells and whistles you would expect from today’s high-end Android smartphone, including quad-core CPU (NVIDIA Tegra 3) clocking at 1.4GHz, 4.6-inch 720p screen, LTE connectivity support, plus a 13.1-megapixel camera. Additionally it’s also waterproof and dustproof, which is an extra feature some of us appreciate (I know I like the idea).

How does the new/upcoming Fujitsu phone looks like? It kinda reminds me on the Galaxy Nexus and it’s slightly bigger than my Galaxy S II, as you will be able to see from our photos.

On the front side it has 3 physical buttons below the screen and (front-facing) camera above. The back side houses that kick-ass camera, LED flash, mirror and speaker. One side has volume up/down and lock/power buttons, whereas micro USB port is located on the other side of the phone. The top of the phone has an extendable antenna which is used for mobile TV reception.

Sadly there’s no 3.5mm headset jack, hinting us Fujitsu wants you to use a Bluetooth headset with its phone.

And now the photos from which you can see all this for yourself. 😉 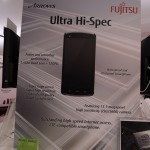 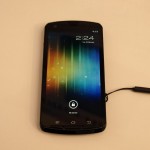 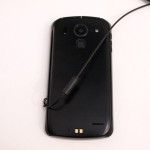 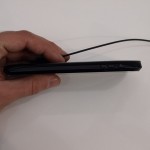 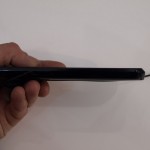 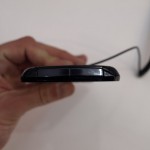 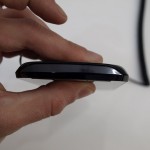 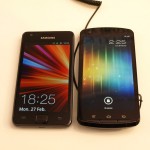 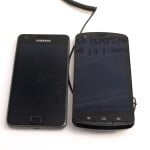