Appreciate, the personal Android Market that’s incredibly easy on the eyes has just released a nifty little chart pertaining to OMGPOP’s (Now Zynga’s) application, Draw Something. By now, you’ve probably heard of the app but it looks like the Appreciate guys wanted to see if it was all hype and how much people are actually playing the game.

Draw Something is definitely simple and addictive, so we can see how it’s gained so much popularity in such a small amount of time. I was glued to the game when I had the Galaxy Note, as the S-Pen actually proved useful. 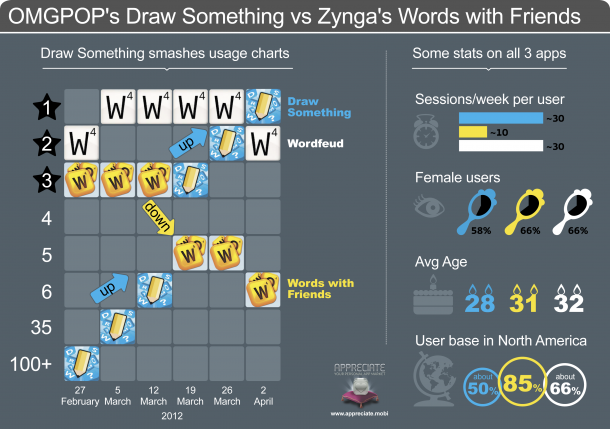 The chart you see shows Draw Something’s rise to the top and Word with Friend’s slow decline. We have our doubts that Zynga is hurting with its app being at #6 right now, though. Appreciate’s metrics measured the amount of weekly app sessions between the applications, not just downloads. It also gives a little more insight of the people using the applications.

It will certainly be interesting to see if the Appreciate guys do another chart for April, as we can imagine that the likes of Angry Birds Space and Temple Run will be ruling the chart next time.

On a side note, if you haven’t checked out Appreciate yet, we suggest you do so now from the Google Play Store.