Fresh off the first showing of BlackBerry 10, Research In Motion CEO Thorsten Heins outlined his vision for the company moving forward. After holding the top spot for about three months, Heins said the company needed “laser focus” in order to be successful.

During RIM’s last earnings call, there were some rumors that it would be abandoning the consumer market. This isn’t true, as Heins said he was talking about the company’s disperate consumer services that weren’t at the core of what BlackBerry does. The consumer market is a valuable one for RIM and it will continue to pursue it but the way the BlackBerry-maker approaches this will be different. 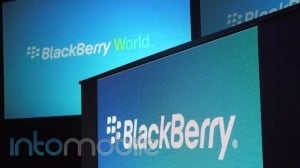 He said RIM’s phenomenal growth over the last decade or so made it lose its focus and we definitely saw this in products that were good ideas but had horrible execution like BBM Music. Heins wants RIM to focus on its core competencies and let app makers or partners focus on things like gaming, mapping and more.

“There are many things that are nice to do but not core to the business,” Heins said.

Heins has implemented a massive restructuring of the company in order to get rid of some of the “fat on the hip,” as he called it. We’ve already seen the company’s founders step aside and a new chief marketing officer and chief operating officer are on the way. He said the management structure was overly complex and that the business culture needed to be changed.

He is making the company leaner and meaner to focus on one major thing: BlackBerry 10. This QNX-based platform isn’t just a smartphone OS, as Heins calls it the next-generation mobile computing engine that can power phones, tablets, cars and more. Even though some may say that it’s already too late, BlackBerry 10 won’t be out by the end of the year. Heins is ok with that timeline, as he wants to make sure it reaches a certain lofty threshold.

“Quality matters … I want the BlackBerry 10 experience to be perfect,” Heins said. 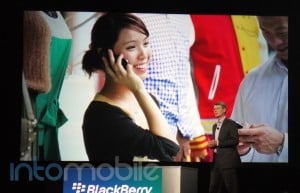 I’ve been impressed with the brief bits I saw of BlackBerry 10 but I’m still not convinced that RIM can deliver that “perfect” experience out of the gate. I think it can be pretty good though, as this is essentially the third rev of the QNX OS for RIM, and most platforms generally need three generations before most of the kinks are worked out.

As for users on BlackBerry 7, Heins made it clear that there would be no backwards compatibility because the two are built on different cores. He said BlackBerry 7 would continue to be supported for “a while” and that the company views BlackBerry 7 OS as a good platform for its entry-level devices and for emerging markets.

There was also a lot of scuttlebutt about RIM licensing its software once Heins took office and he clarified that a bit. The company is looking to license BlackBerry 10 to other verticals like cars and it will eventually decide on if it should license to other handset makers like Samsung. Besides, Heins said, it has to prove that BlackBerry 10 is good before others would even want to license it.

Heins also confirmed that we will be getting a 4G PlayBook by the end of the year and I’m assuming that means LTE. He also said that it will be shifting the focus on its tablet division and trying to make it more of an enterprise tool first, then marketing it to consumers if it gains traction. This will also be very tough, as the iPad is finding its way into many businesses already.

The U.S. market will continue to be an “uphill battle” for RIM but Heins said the company is still experiencing rapid growth. He blamed the lack of 4G LTE and its touchscreen efforts for its slide in U.S. market share but he’s confident that its BlackBerry 10 portfolio will help it gain ground.

Nokia has just announced via a press release that it is taking multiple legal actions to protect patents it feels...