While the talk of the town may involve the Samsung Galaxy S III, the HTC One X is certainly a long way from being forgotten. The refined version of HTC Sense combined with the sexy and solid hardware won’t be leaving our minds anytime soon, but according to a new rumor, the specs might.

While the existing variants of the HTC One X are very fast (Tegra 3 and S4), we might see the handset get a few bumps in the specs arena at some point in the future. Said spec bumps would be an additional GB of RAM, and the quad-core APQ8064 (Krait) processor. While this is more than acceptable for most to wait for the upgraded hardware, it’s still a rumor. If this rumor does turn out to be true, we would hope that HTC will push the new handset out as soon as possible.

Other than the addition of the extra GB of RAM, the screenshot doesn’t tell us much. For all we know HTC could be shipping the Tegra 3 One X with 2GB going forward, which wouldn’t be a bad thing, but there’s no evidence to say that the handset itself will be shipping with any specific processor, other than the fact that it’s “quad-core”.

We do know that HTC is focusing on the high-end smartphone market going forward, and while the rumored upgrades sounds great, we’re inclined to call BS at this moment in time. The One X hasn’t been on the market for very long at this point and repackaging the handset as something brand new down the road might not go over all that well to the consumer. We really like the design and hardware of the One X, more so than the Galaxy S III, but if a repackaging does take place for the One X, it best be a significant upgrade to get some attention. Krait and 2GB of RAM might do it for some, but not for the uninformed, average consumer. 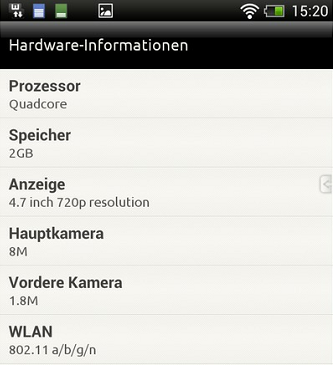 We don’t buy it. What about you?

Verizon Wireless rolls out Android 4.0 update for the DROID RAZR and RAZR MAXX

Verizon Wireless announced today that it is releasing the highly anticipated Android 4.0 Ice Cream Sandwich update for the Motorola...