According to a screenshot that was discovered by 9to5Mac, it looks like the ability to have a FaceTime call over a cellular connection, a feature that’s standard in iOS 6, is going to be switched off by AT&T. They’re either going to disable the feature completely or find some way to nickel and dime you to death to use it. If Steve Jobs were alive, would this have happened? That’s a stupid question, and it was kind of sort of supposed to be a joke, but think about it for a second. AT&T sold 5.5 million smartphones during Q1 2012. Know how many of those were iPhones? 4.3 million. Who do you think is wearing the pants in this relationship? Why didn’t Apple put their foot down and tell AT&T to simply cut the bullshit? Then again, tethering does cost extra on Verizon, so maybe Apple just recognizes that in order to sell phones in the United States they’re going to have to play the rules. 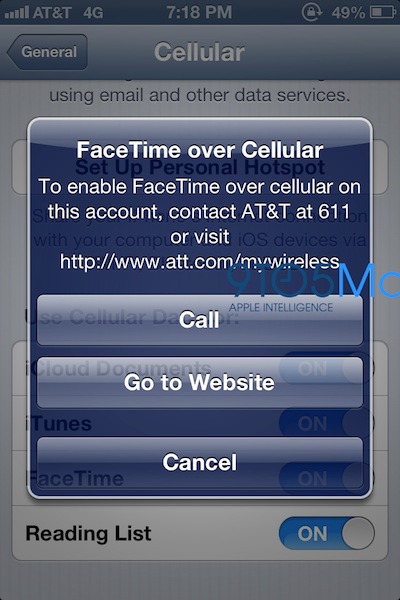 If you live in Europe or Asia, chances are that you’re not going to deal with this “issue”. Why? Because European operators have figured out that it’s better to invest in network quality and customer service than tinkering with the user experience of the devices they sell. Sure, there may be a few exceptions in the UK, but go to Spain, Italy, or Germany and you’re going to have a hard time finding a device that has an operator logo etched on it. Anyway, back to the news at hand. AT&T told 9to5Mac that:

“We’re working closely with Apple on the new developer build of iOS6 and we’ll share more information with our customers as it becomes available.”

Translation: We’re about to experience a shit storm, so let’s brace ourselves, find a way to explain why we’ve come to the discussion we have, and we should prepare to change our stance.