The IDC have released their Q2 report on the mobile market, and it paints the same picture we’ve seen in quarters past. Mobile customers are adopting smartphones than feature phones en masse, with a 42% increase in smartphone sales year over year. Overall, more phones were sold in Q2 than ever before, with 406 million units sold in the quarter, representing a 1% increase from the previous quarter.

When it came to manufacturers, Samsung and Apple continued their global domination, with the two companies combined representing nearly 50% (49.5%) of smartphones shipped in Q2. Samsung shipped a record 50.2 million smartphones devices in the quarter (up 172.8% from Q2 2011), thanks in large part to the release of the Galaxy S III flagship device and continued success with the Galaxy Note superphone, while Apple’s sales showed a more modest year over year growth of 27.5%, resulting in a net smartphone market share drop of 1.9%. Apple device shipments showed a decline from the previous quarter ahead of the Q4 launch of the next iPhone. 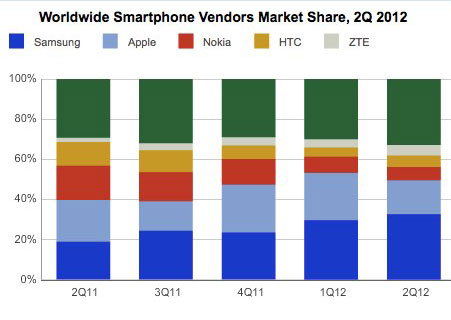 Nokia continues to struggle in the smartphone market, with a sharp decline in smartphone shipments in the quarter due to declined sales of the company’s Symbian and MeeGo smartphones. While its Windows Phone sales nearly doubled from the previous quarter, the company’s year-over year shipments declined almost 40%. Windows Phone 8 is due out in Q4 2012, and the company hopes it will see strong gains in the important holiday sales season. HTC’s year over year shipments also showed sharp declines, though the company gained enough in Q2 to retake the number 4 spot from ZTE, sparked by sales of the HTC One Series of devices in the Asia/Pacific region.

Competition is expected to heat up in the coming quarters, with the next iPhone, Windows Phone 8, Android 4.1 Jelly Bean, and BlackBerry 10 all on the horizon. As it stands now, however, Samsung has many reasons to celebrate as they’ve managed to drum up a killer Q1, setting a smartphone shipment record along the way.

Select Acer Iconia tablets to get Jelly Bean updates, too

After Asus, we have Acer seemingly confirming that its tablets will get Jelly Bean updates. It's "seemingly" because we don't...