Well, well, well; look what we have here. It’s the two phones that everybody loves to hate, the Apple iPhone 5 and the Samsung Galaxy S III. Android lovers usually despise the iPhone 5 and iOS lovers usually despise the Galaxy S III. We’ve pitted them head to head to determine which of these devices will come out on top with victory. All of the bases are covered from design to performance to S Voice and Siri to the controversial Maps. Both are excellent smartphones with their own strengths and weaknesses. That said, let’s start the showdown. 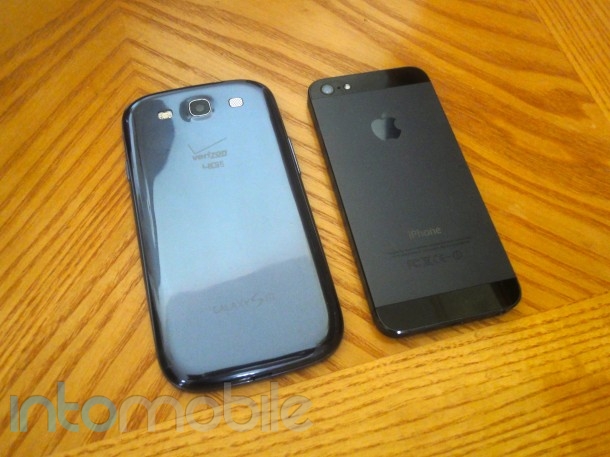 Inside, the Samsung Galaxy S III packs a Qualcomm Snapdragon S4 1.5GHz dual-core processor, 2GB of RAM, a 2,100 mAh battery, 4G LTE connectivity, and either 16GB, 32GB, or 64GB of storage which is expandable thanks to its microSD card slot. The display on the outside measures 4.8 inches diagonally with a 1280×720 and 306 ppi resolution. The camera on the back has an 8MP lens and the one on the front has a 1.9MP lens.

The iPhone has never been ahead (or aimed to be ahead) in the spec game and this is no exception. The iPhone 5 has a dual-core processor inside, but some have speculated that the clockspeed is at around 1.02GHz. It features half the RAM at 1GB, the same storage options, and the same 4G LTE. The battery capacity is unknown, but more details on battery life are below. The iPhone 5 gets a larger display than previous iPhones at 4 inches with a 1136×640 and 326ppi resolution.

The Galaxy S III has a full-body plastic design, but it’s actually pretty sleek. Samsung adds a brushed metal effect that really adds to the level of elegance.

I love the pebble blue color, which I had the pleasure of having on my review unit. Other than the standard black on most phones, this is my absolute favorite color ever on a phone. That brushed metal effect makes it look almost like a toned-down electric blue and it just looks awesome.

The iPhone 5 is made entirely of aluminum and glass and once again Apple reigns in the design department. The sides are either silver or slate aluminum depending on the color of the iPhone and the back has a large center aluminum panel with two slim cutouts on the top and bottom filled in with glass, presumably so wireless connections can function.

As nice as the Galaxy S III looks, I have a few small design gripes. I still don’t like capacitive buttons and it has two on the front. Plus, the volume button on the side is just one big button and you are supposed to figure out whether you are pushing it to lower the volume or raise it.

The bigger question revolves around the display: is the GSIII comfortable to hold in one hand? In my experience, it’s not. I’m the type of person who typically uses my phone with one hand because I’m carrying something in the other, and I struggled navigate around the Galaxy S III with one hand. I had to constantly loosen my grip on the device and move my hand up or down around it to position my finger correctly and it was just a pain. The iPhone 5 fits almost perfectly in my hand by comparison. If you have no problem using two hands in most cases to use a phone, you can neglect this entire paragraph.

The displays themselves are gorgeous on both. The iPhone 5 has an advantage in bright sunlight as its easier to see. As much as many people might prefer the bigger display of the GSIII for viewing more content, I found that more often than not, apps don’t take advantage of the extra space. A lot feels blown up and oversized. I guess that’s good, but I’d rather see smaller fonts and buttons in favor of showing more meaningful content. Videos and games shine more than anything else.

While design and display preferences vary between people, I think it’s safe to declare the iPhone the winner here. The materials used are top-notch and the device looks nothing short of premium.

The iPhone 5 uses durable aluminum and glass in its unibody construction. The Galaxy S III uses plastic. The winner is clear in terms of build quality — the Galaxy S III doesn’t even come close to the iPhone 5.

Keeping that in mind, the build quality of the GSIII isn’t as bad as I was expecting. Despite being made mostly of plastic, it does feel somewhat solid in the hand. Pull off the back cover, however, and its weaknesses are immediately revealed. I could snap that flimsy piece of plastic in half without much effort at all if I wanted to. 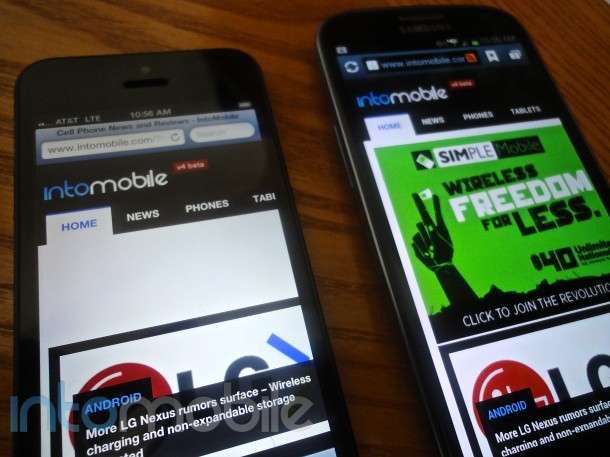 Performance overall was a bit faster on the iPhone 5 than on the Galaxy S III. It was especially apparent when comparing AT&T and Verizon LTE speeds. AT&T was significantly faster than Verizon in every case. When I switched to WiFi — both of which had the same connection — the gap tightened, but the iPhone still came out in the lead.

Graphics performance was typically better on the iPhone too. There was less lag when playing games or zooming around in Maps. Apps open just a tad faster as well.

On the SunSpider JavaScript benchmark, iPhone 5 came in at 1034.1 ms while the Galaxy S III came in at 1894.5 ms, and this test was performed over the same WiFi connection. 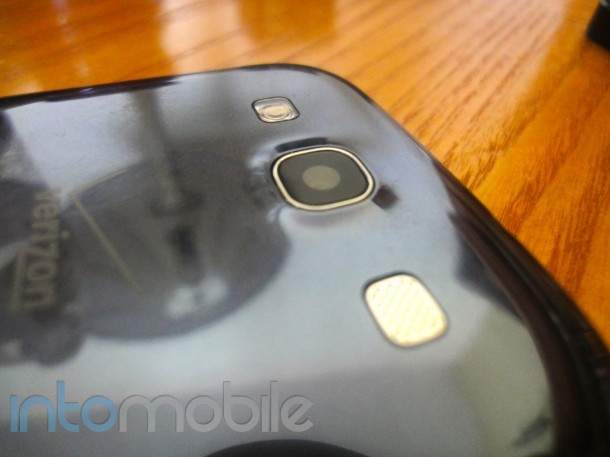 I don’t like to write too much about phones’ cameras in reviews because I think the sample photos should speak for themselves. Let me just say that the iPhone 5 does have a better camera than the Galaxy S III, especially for low-light photography. During the day, it’s only a tad more sharp but for the most part they are on par with each other. One thing I will note is that it seems like it’s easier to take a stabilized photo with the GSIII over the iPhone 5. As you’ll notice, a couple times the shot was faintly blurred because I moved my hand a bit, but when the phone is steady, the iPhone does tend to produce minutely better photos overall. You can see for yourself with the images below. 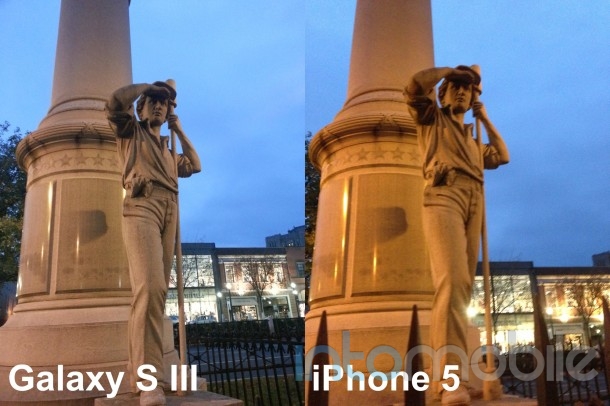 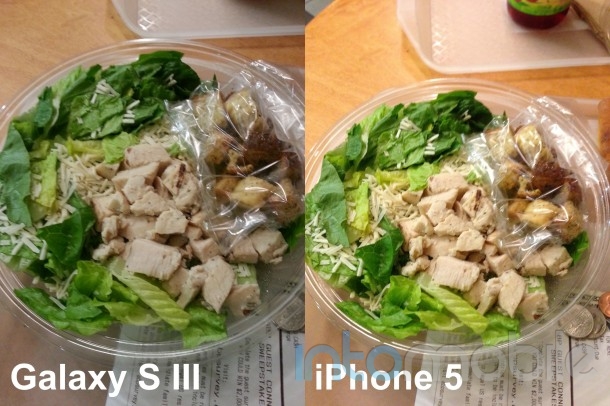 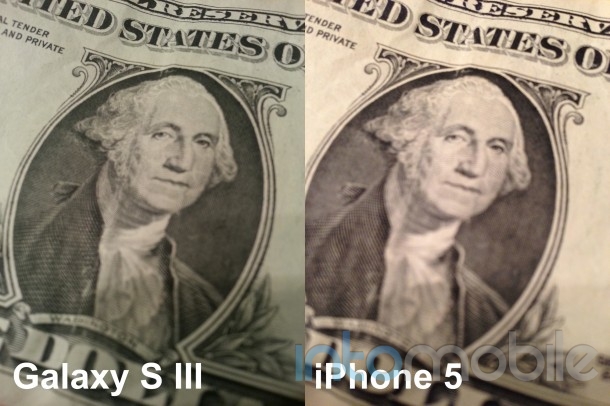 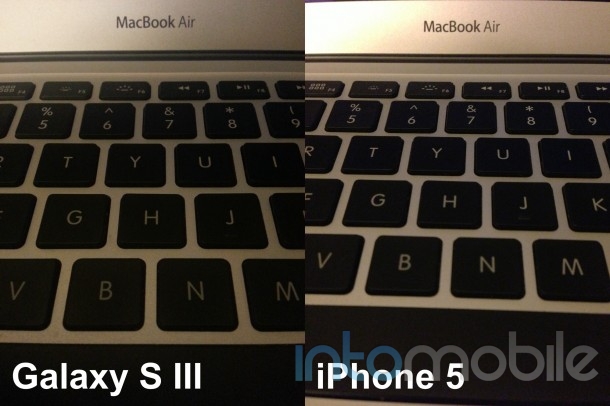 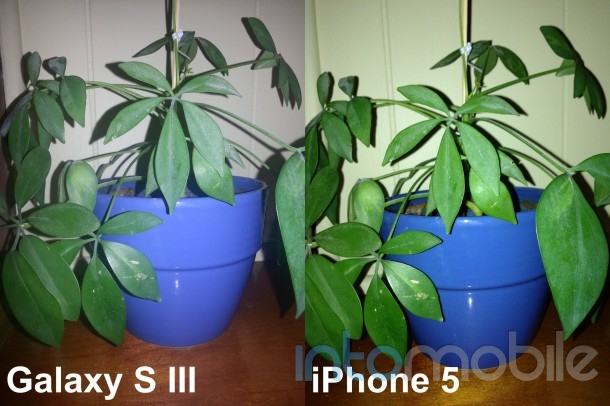 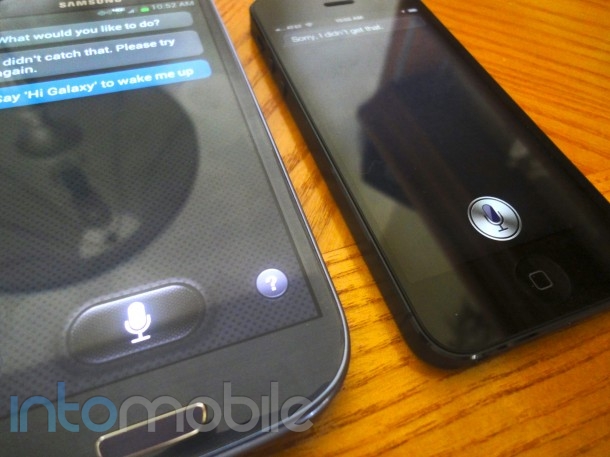 Now it’s time to pit the two women who live inside each phone against each other. Which is more helpful at answering your questions and performing the tasks you request? Well, Siri.

Not only does Siri do more thanks to the iOS 6 release like find movie theaters and sports scores, but I found that it was usually quicker and understood better what I was saying. The latter is probably due to the better microphone. S Voice was faster at doing quick math calculations or throwing out quick facts. If I asked who the first president of the United States was, Siri would take a few seconds to bring up a sheet with Wolfram Alpha, while S Voice would quickly just answer out loud that it was George Washington, which I appreciated.

Still, there were some questions I asked that S Voice just couldn’t answer that Siri could, either due to the GSIII not picking up my voice accurately or S Voice not having the resources to answer.

Siri is also easier to carry out a comical conversation with and we all know we use these assistants for that purpose more often than we’d like to admit. 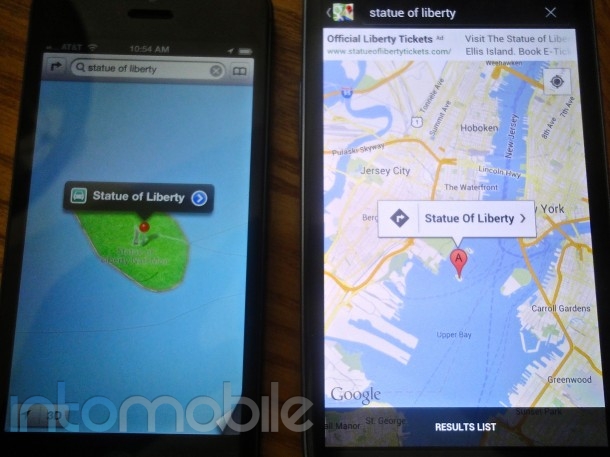 There’s been a lot of controversy over Apple’s new Maps app in iOS 6 because in many locations, errors can be spotted pretty easily. I used both the iOS 6 Maps app and Google Maps on Android for navigation and both got me to where I needed to go without any trouble. This may vary if you live in a place where Apple’s maps aren’t as accurate, but I’m lucky enough to not have any problems with it.

Google Maps is the champion in terms of data and is with little doubt the superior mapping app. Apple’s Maps app shouldn’t be a deal breaker for the iPhone 5 though because if it doesn’t work where you are, there are third-party alternatives like MapQuest and Waze — both of which are free and work just fine. 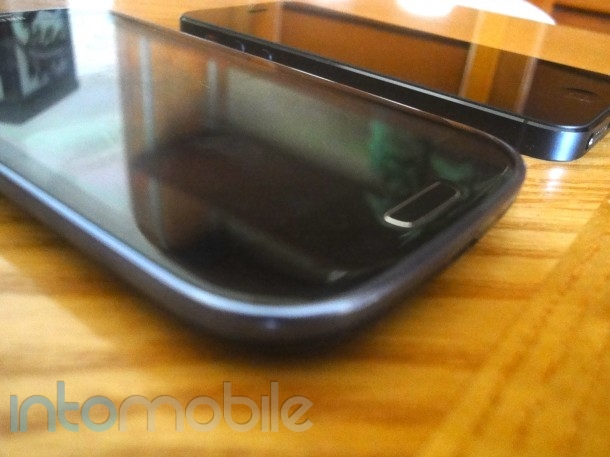 Call quality on the Samsung Galaxy S III is slightly worse than on the iPhone 5 in my usage. People I talked to always sounded noticeably more fuzzy and they said I also sounded a tad fuzzier. On the iPhone 5, however, callers sounded very clear and apparently, so did I. That’s presumably due to the new microphone system compared to older iPhones.

Keeping in mind that the iPhone 5 does have the edge here, how many people actually use their phone to make phone calls anymore? For most smartphone owners, either device will have sufficient call quality.

Battery life is harder to determine because Android measures it differently than iOS does. Honestly, it seems like it’ll have to be a tie between the both of them. They are both more than adequate to last throughout a typical day of usage, and even one with heavy usage as well.

I want to say that the iPhone 5 maybe lasted just a tad longer, but then again I did play games on the GSIII for a little extra time because I liked the way they looked on its bigger screen.

For call quality and battery life, you can’t lose with either of these handsets. 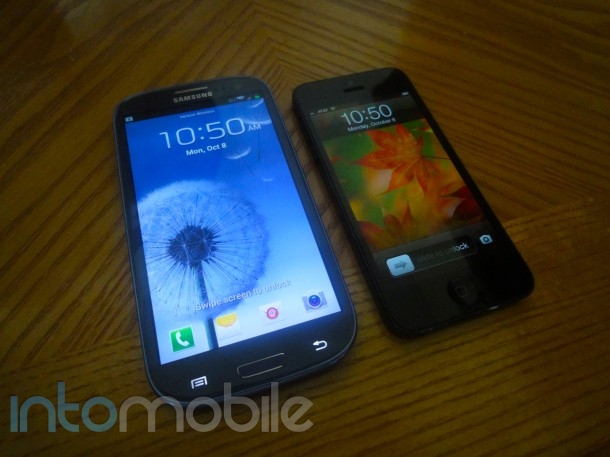 Bottom line: which is the better smartphone? For three small reasons, I’d go with the iPhone 5. It’s a bit faster than the Galaxy S III, it has a slightly better camera, and the display is perfect for maneuvering with one hand.

However, if you’re the type of person who would gladly use two hands on their phone in exchange for a gigantic display and can live without the better photos and performance, the Galaxy S III might still be worth your consideration.

Another factor comes in to play as well: Android versus iOS. If you use Google services frequently or like to customize your mobile OS to no end, there’s no question that you should buy the Galaxy S III. If you’re into the Apple ecosystem with iTunes and iCloud or just praise the simplicity of iOS and the build quality of Apple’s hardware, the iPhone 5 is the easy winner here. As much as I hate to not give a definite answer as to which OS is better, it really does come down to personal preference. They both have their strengths and weaknesses depending on everyone’s individual usage habits.

Based on the tests for this review/comparison, while I did declare the iPhone 5 the winning smartphone with the edge, make no mistake that these are two exceptional phones. I’m sure loyal Android users won’t even consider the iPhone 5 just like loyal iOS users won’t even consider the  Samsung Galaxy S III. It’s fairly hard to be displeased with either of these handsets.

Be sure to check out our official individual reviews of the iPhone 5 and Galaxy S III as well.

The highly anticipated Samsung Galaxy Note II might be on its way to T-Mobile in just a few weeks from...