For those of you out there patiently waiting to buy yourself a factory unlocked iPhone 5, may not have to wait much more. Over the weekend, prices of the unlocked 16GB and 64GB GSM iPhone 5 were leaked, after they were spotted by a simple search for “iPhone 5 factory unlocked” on the US Apple online store. Of course, Apple since then has gotten rid of the search results.

To no one’s surprise, prices for the unlocked iPhone 5 were the same as last year’s unlocked iPhone 4S when it went on sale in November. The 16GB version was $649, while the 32GB model went for $749, and the 64GB $849. So expect the same price scheme with the new iPhone 5.

The timing of this leak makes perfect sense. If you follow the way things usually work with unlocked versions compared to locked carrier variants, then you’d know that those unlocked models don’t hit the market until a few weeks later. This is a stupid thing only done here in the US, because major carriers have a monopoly on the market. That said, it’s been at least 6 weeks since the locked carrier iPhone 5s began shipping, so the rollout of the unlocked models could be imminent.

Unlocked versions of the iPhone are becoming more and more popular, as people are starting to realize it’s better to buy unsubsidized phones without a two-year contract agreement. Plus, the value of unlocked iPhones are great when you try to flip them on Craigslist or eBay. 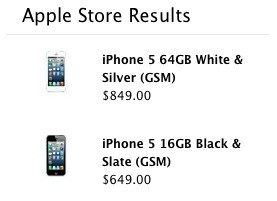 Apple’s next update is rumored to be iOS 6.1, and it’ll carry some cool additions to the popular mobile platform....