Red alert! We’ve still got a small amount of time between now and the release of JJ Abrams’ newest incarnation of the Star Trek franchise, “Star Trek Into Darkness.” Since we all now essentially have tricorders in our pockets, aka smartphones, Paramount has put together a rather interesting way to promote their new movie. An app simply titled “Star Trek App” has materialized on the Google Play Store, giving trekkies young and old a new way of exploring the Star Trek Universe.

The app has a bevy of cool features, serving up trailers, news and other snippets of info about the upcoming movie. The most intriguing feature however is the augmented reality aspect, involving virtual scavenger hunt in which players will use their smartphones to scan photos and other imagery, use audio and location-based services to unlock new content and earn points. For example, after clicking on the maps portion of the app, I’ve been directed to visit the future site of Starfleet Academy in San Francisco, which will no doubt use location-based services to unlock a new feature.This app is the first commercially distributed app to feature the use of some of Qualcomm’s new tech, the Gimbal platform and Qualcomm Vuforia augmented reality tool.

This app is a very clever way of promoting “Star Trek Into Darkness” and may be the way of the future for feature film marketing. So cadets, charge up your smartphones, grab your communicator and a cup of earl grey from the replicator. I will be leading an away team to scout out the future site of Starfleet Academy, and all are welcome to join. Set phasers to stun, folks. It’s the Marina, not the Tenderloin.

Live long and prosper, and grab the app here! 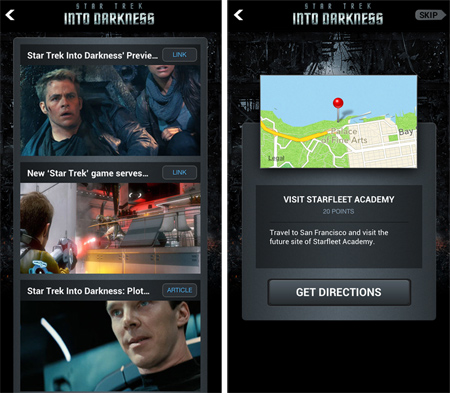 HOLLYWOOD, CA (February 1, 2013) – “STAR TREK INTO DARKNESS” first of its kind application, based on J.J. Abrams’ upcoming Paramount Pictures film, is now available to download for free from the App Store and Google Play. Users who have the app will have unprecedented access to all STAR TREK content, as well as the opportunity to
participate in missions and win valuable prizes.

Utilizing the latest technologies from Qualcomm Incorporated, such as Qualcomm Labs’ Gimbal™ platform and Qualcomm Vuforia™ augmented reality platform, the app will allow users to delve deeper into the Star Trek universe by interacting directly with materials from the eagerly awaited film to unlock additional content and experiences.
The users collect points, see content, and work their way through the Star Trek Academy.

The app was first announced on January 7th, 2013 at the Consumer Electronic Show, during Qualcomm’s Chairman and CEO Dr. Paul E. Jacobs’ keynote address demonstrating the ability to “harness the power of the smartphone to bridge the digital and physical world, allowing the studio to market the film in the real world and simultaneously bring users into the film’s story and world.”

“STAR TREK INTO DARKNESS” is written by Roberto Orci & Alex Kurtzman & Damon Lindelof and directed by J.J. Abrams. Abrams is producing with Bryan Burk through Bad Robot Productions, along with Lindelof, Kurtzman and Orci. Jeffrey Chernov and Skydance Productions’ David Ellison, Dana Goldberg and Paul Schwake are the executive producers.

“STAR TREK INTO DARKNESS” opens in theaters everywhere May 17th, 2013.

Intel is looking to make a big splash at the Mobile World Congress in Barcelona this year by announcing their...